Born in 1937, David Hockney grew up in the shadow World War II. It was a tumultuous time for his family, especially David’s father who received immense ridicule for his stance as a conscientious objector and communist leanings. The Hockney's narrowly avoided a German bombing run and endured a short-term separation when they were split up and temporarily relocated to avoid other German bombing efforts. David's father held many different jobs to make ends meet, one of which included repairing strollers and bicycles. As a young boy David would watch his father bring the old and damaged machines to life with new paint and parts and was in awe of the transformation. David later wrote, “It is a marvelous thing to dip a brush into paint and make marks on anything, even on a bicycle, the feel of a thick brush full of paint coating something.”

Although his family was not well off, David had many opportunities to take in other forms of art. He received piano and calligraphy lessons, attended orchestral performances, and went to the movies, which were his favorite above all. But his love for the visual arts bordered on obsession. His brother’s and sister’s earliest memories involve David with a pencil in his hand. In school he was constantly doodling on his notes as well as tests. But his family had difficulty in accepting art as a singularly worthy pursuit and ensured he was enrolled in a grammar junior school. This did little to stop David from pursuing his dream of training in the arts. At grammar school he purposefully failed his classes so he would be allowed to attend art class, which was only offered to underperforming students. Despite being different than many in his family and in his school he did not avoid school related activities or shy away from interacting with his peers. In fact he frequently illustrated for his school newspaper and drew posters for various school clubs, and was essentially known as the class clown.

As a reward for both his perseverance and his gifts David eventually earned a spot at the Bradford College of Art before attending the prestigious Royal College of Art, and starting an illustrious career.

Tea Painting In an Illusionistic Style, 1961

In his early work in the Royal College David explored many different subjects ranging from popular culture to himself. Pop art was the focus of many of his peers at the time, but was something Hockney shied away from. In fact, this picture, the British equivalent of Coca-Cola at the time, was self-admittedly as close to pop art as Hockney would come during his career. This willingness to experiment is one of the things I enjoy about Hockney’s art: any subject or particular style, when done “right”, is suitable for a picture. 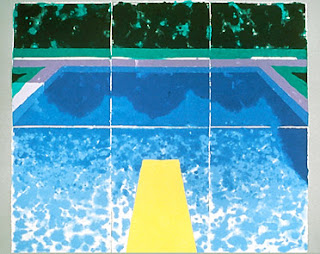 In a labor intensive six-step process Hockney formed, pressed, dyed, and dried paper pulp to make over ninety-five works during a three month process. This is typical of Hockney’s work ethic and productivity. In fact during the fall of 1960 this productivity led to him completely exhausting his supply of paint. Being a poor student at the time, Hockney turned his attention to the printmaking department, which was known to give free materials to students. This led to his first attempts at printing and the creation of Myself and My Heroes, a black and white etching of Walt Whitman, Mahatma Ghandi, and Hockney. 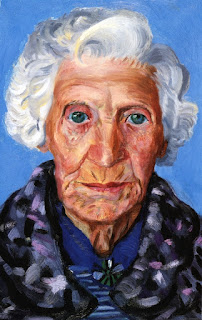 In the 80’s Hockney's portraits took on a more realistic look, clear in this portrait of his mother, appropriately titled Mum from 1988-89. To me this illustrates a clear command over understanding and translating the different ways light interacts with a subject as well as being able to translate what is seen into a near exact depiction of the subject. This shows the depth as well as the breadth of Hockney’s artistic capabilities, especially in comparison to earlier works or his more recent photo collages. 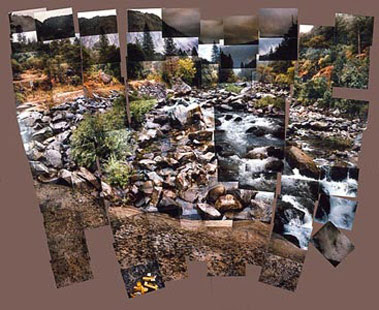 Hockney’s interest in any subject and his willingness to experiment is what I like most about him. But something that really resonated with me was his love of the natural world. He has done many different paintings of natural settings (a stand of woods not far from his home in Yorkshire England, the Grand Canyon, and various locations around California), but this photo collage of the Merced River in Yosemite is one of my favorites. As Hockney said, “A photograph cannot really have layers of time in it in the way a painting can, which is why drawn and painted portraits are much more interesting. It’s a problem I still keep thinking about.” By arranging pictures taken with changes in the lighting, time of day, and point of view Hockney seems to have overcome the limitations he previously saw in the medium and gave us a layered view of a body of water that itself artfully carved one of the most beautiful natural landscapes in North America.