Victor Vasarely (1906-1997) is known as the father of Op-Art, or optical art, which was developed at the same time as pop art in the 1960s. His works famously uses bold lines and bright colors, and geometric shapes to create optical illusions and affect the viewer's perception of his art, such as the appearance of 3D shapes.

Vasarely was born in Hungary in 1906, and originally intended to make a career in medicine. He was incredibly gifted and fascinated with scientific theories, and put aside his studies at the University of Budapest's School of Medicine in order to explore the theories of relativity, quantum mechanics, and astrophysics on his own. Along the way, he determined that art could provide a way to visualize scientific models. In 1929, he enrolled in the Muhely Academy in Budapest to study fine and applied arts, and began his exploration in the intersection of art and science. He learned about geometric abstraction, and developed a wealth of technical and scientific experience before moving to Paris in 1930  to pursue work in graphic art.

In his early works, from 1932-1945, Vasarely drew and painted figures from nature and observations, though many of these early pieces already included the bold lines and structures that would become his trademark in op-art. 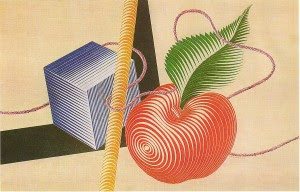 From 1949-1952, Vasarely created his first abstract works, inspired by tile cracks from the Denfert-Rochreau metro station in Paris, and breaking glass. Here he seemed to develop further his style of structured, distinct shapes and sharp color contrast. His series Zebras combines his figure drawing with abstract concepts in black and white. 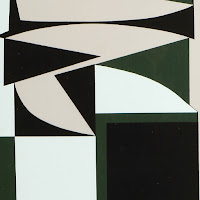 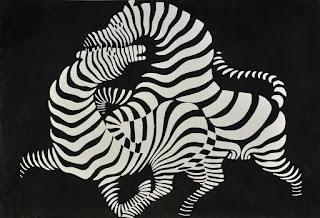 In the 1950-60s, Vasarely's work developed into optical art, where he relied on visual perception to affect viewers through his art. He first created black and white prints and paintings, and experimented with film and other materials to create his kinetic and optical effects. 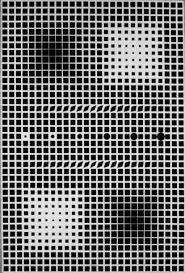 Then he began adding color into his works, and two of his most famous series were created: Folklore Planetaire and Alphabet Plastique. Alphabet Plastique introduced a "programming language" which defined a basis and algorithms for creating structures, and some view this as Vasarely's greatest contribution to 20th century art history. The Alphabet Plastique was a systemic approach to painting, where there are 15 root forms derived from basic shapes such as the circle and square, with 40 variations of the root forms, 6 color scales, and 20 hues. He called the sketches for these works "programs", and they were essentially blueprints that expressed his ideas in the terms of the Alphabet Plastique. His art from the 60s to 70s had a huge impact on architecture, computer science, and fashion, and he designed the spiral logo of the 1972 Olympic Games in Munich. 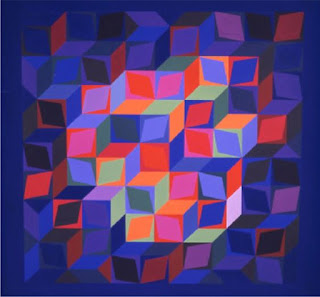 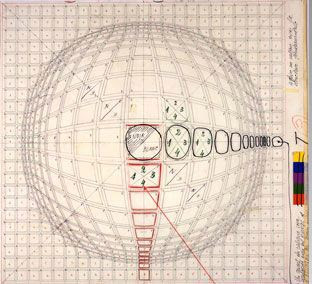 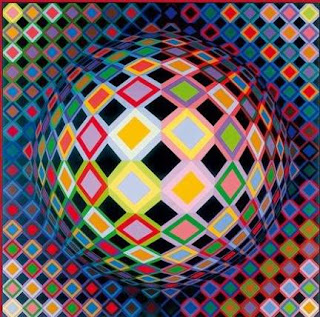 I was immediately interested in Vasarely after seeing one of his works in an art collection book, where the bright colors and the perception of 3D differentiated it from the works of other artists in the collection. I loved learning about and viewing his sketches, where his mathematical mind clearly influenced the way he thought about art. As an engineering major, I really appreciate details, structure, and methodical approaches, and I was fascinated by his Alphabet Plastique concept as an art programming language. I thought it was very cool with how his art ties into technology and how it grew from academic interests in science, and how his artistic algorithms paralleled the development of the computer and became a precursor for digital imagery.