René Magritte was a Belgian surrealist artist born in 1898 in the province of Hainaut, a French-speaking region of Belgium. He first felt an artistic calling when he very young in Châtelet where he took his first drawing lessons around 1910. Later, he was more formally trained at the Académie Royale des Beaux-Arts in Brussels from 1915 to 1921 under the instruction of Constant Montald but eventually left due to lack of interest in what he was being taught there. Not very much is known about his early life and childhood, but perhaps one of the most crucial points to understanding Magritte as an artist is tied to his mother's suicide when he was thirteen. It was alleged that Magritte was present when her body was retrieved from the River of Sambre, and that upon finding it, her face was covered with her nightdress. A popular interpretation of this event is the traumatic image of the enshrouded face seems to have resurfaced and influenced some of his most well-known pieces, such as Les Amants (The Lovers II):

Magritte however, disagreed with such interpretations, and denied any connections between the enshrouded faces and his mother's death, " My painting is visible images which conceal nothing,” he wrote, “they evoke mystery and, indeed, when one sees one of my pictures, one asks oneself this simple question, ‘What does it mean?’ It does not mean anything, because mystery means nothing either, it is unknowable.”

This quote is largely representative of Magritte's body of work. Although his style falls under the umbrella of Surrealism, his position within the movement was ambiguous. His relationships with other members of the movement were at times strained, and he chose to diverge from the imaginative and privately fantastic phenomena explored by his colleagues (such as Dali), instead focusing on deliberately objective representations of objects in unusual contexts, thereby giving them new meanings. He resisted interpretations of his paintings as Freudian symbols and did so by consciously attempting to eliminate any personal contexts and hints of his personality. An ironic take on his focus on the objective portrayal of objects is his painting, La trahison des images (The Treachery of Images):


Below the painting of the large pipe, the script declares "This is not a pipe". Magritte challenges our conceptions of images, by highlighting that the image of a pipe is not a pipe itself, or even the linguistic depiction of one. In doing this, he asks us to question our interpretations of images and our frequent compulsion to confuse an image with the object it represents. This painting sort of satirizes Magritte's own style - he is stating that no matter how realistically or objectively he paints an object, it can never be the object itself. The lesson is both obvious and enigmatic --do these images of the objects hold the same meaning as the objects themselves? If not, then his placing them in unusual contexts in his other works to create a novel juxtaposing effects serves to further mock the audience's willingness to confuse the depiction with the actual object.

This is a recently recovered illustration done by Magritte depicting a woman holding her own breast with one hand, and in her other, holding a smaller version of herself doing the same thing. The drawing, done is Indian ink, is done with deliberate lines and includes just enough detail to give the viewer the whole story without any extraneous distractions. By framing the scene with drapes, he is able to give the composition a narrative feel, and the dramatic contrast of the moon, stars, and smaller versions of the woman as solid black objects give them weight. 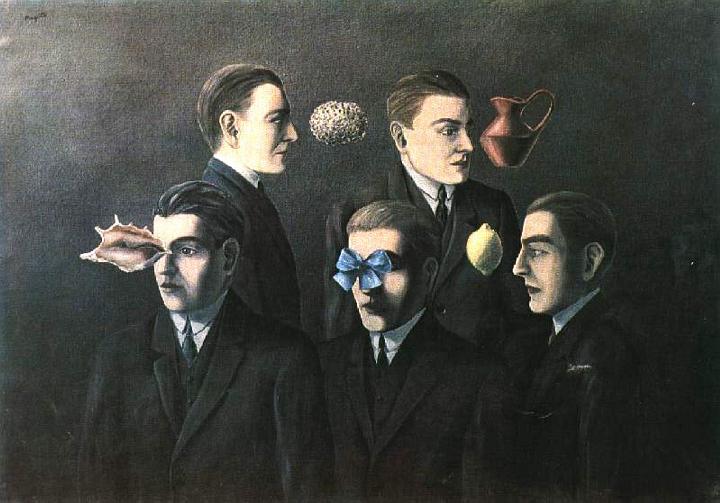 Magritte rarely painted the faces of figures but when he did, they are often portrayed with neutral expressions and commonplace hair and clothing. The man depicted here is shown from 5 different viewpoints, and in front of his eyes at each position floats a unique, everyday object. However, compared to the figures, the objects are the unique individuals, and it is the man who is portrayed as impersonal and mass-produced. One of the many paintings in which Magritte used birds in flight images, Magritte contrasts a realistically depicted landscape at night with a larger than life, almost cartoonish, cut-out of a bird showing the coming of the day. I found this image particularly interesting because of its use of foreground and background, with little to no use of the middle ground, due to the bird's central role in the painting.

I'm a big fan of Magritte's work for a lot of reasons: although he is technically skilled and chose to portray objects objectively most of the time, he is still able to make them compelling and introduce novel meaning to his images, even if only by the assumption that we his viewers will buy into these new meanings once taken out of their old contexts. Like many artists, he experimented with many styles throughout his careers, such as impressionism and cubism, and although I did not post them here, he was still able to maintain his wit, humor, and eroticism even when utilizing these different styles. Perhaps he is not known for having developed a completely unique style like Van Gogh or Matisse, but thematically, his work would be incredibly hard to duplicate. I admire his ability to separate his art from his personal life, refusing psychoanalysis by art critics, and still being able to create a sense of detached enigma in his works. His work is at once prosaic and obscure-- he claims that they are meaningless images and yet, we are still captivated and influenced by them decades later.