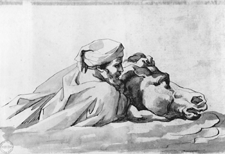 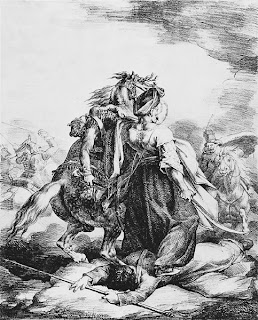 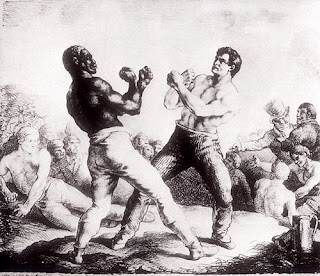 Théodore Gericault, one of the pioneers for the Romantic Movement was born in Rouen, France September 26, 1791, where he was educated in the tradition of English sporting art by Carlet Vernet and classical figure composition by Pierre-Narcisse Guerin. Gericault left Rouen to study at the Louve where he copied paintings and drawings from various artists including Rembrandt. He is known for his styles of Neo-classicism as well as romanticism and is most famously known for his painting, "The Raft of Medusa." This famous French painter and lithographer lived a short life dieing at the age of 32 in Paris January 26, 1824.
Gericault was known for his paintings involving sports, animals or war. The sporting events he usually depicted were English sporting events that he watched while traveling to London in the early 19th century. Figure 3 is a drawing of a boxing match done in ink on top of pencil with chalk. I just felt he did a great job depicting this match using the darkness of pen mixed in with the pencil. This is a technique that he used in a number of his drawings and one that can also be seen in Figure 1. Gericault has a love for animals pariculary horses and this man hugging the horse in the water shows a lot of compassion in his drawing. There is not much else going on in this composition but the man and horse are both outlined in ink while the rest of the image is in pencil. Figure 2 is one of his famous war depictions done in completely pencil. I thought it was interestig in how he depicted a valiant horse with men all over the ground again showing his compassion for animals.
I was hoping to be able to scan a few more pictures from his masterworks but the scanner in Lilly was not working but i hope everyone enjoyed this pictures.