With regards to visual art, I have always found the elements of movement and animation fascinating. I personally feel that the ability to convincingly create the illusion of motion in a still piece of art is near the pinnacle of artistic ability. Consequently, I was excited to find that the Renaissance artist Raphael Sanzio had actually had studied and practiced intensely to capture a sense of dynamism in his work.

Raphael Sanzio lived from 1483 to 1520 in Rome. He was born the son of the court artist Giovanni Santi, from whom he presumably learned to paint at an early age. Having studied under several teachers, Raphael is noted for is uncanny ability to absorb the styles of other artists and incorporate it seamlessly into his own works.

His career took off at age 13, 6 years after his father's death. He and a painter from his father's workshop were commissioned to work on an Altar Piece in Citta di Castello. Soon after, Raphael relocated to Florence and finally to Rome, where he worked for Pope Julius II and his successor Pope Leo X. Raphael was indisputably the dominant artist in Rome until his death in 1520 at age 37. 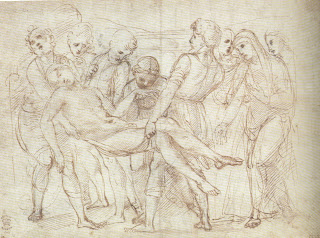 Like the majority of Raphael's paintings, Study for the Borghese Entombment, 1507, is a study for a later painting. The drawing was done in pen and ink with traces of under-drawing in black chalk. The abundance of diagonal line work truly conveys the weight of Christ's body on the bearers, a perfect example of Raphael's ability to capture movement. 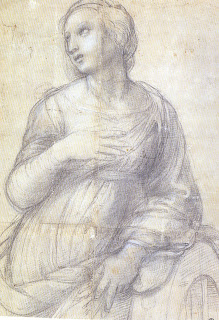 Cartoon for St. Catherine of Alexandria, 1507, is a drawing done solely in black chalk. I chose this drawing because of the sense of movement captured in the portrait by the use of curves. Historically, this portrait is reminiscent of ancient sculptures of the goddess Venus. 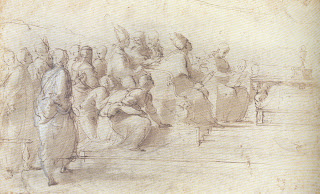 Study for the left side of the Disputa, 1508, is my favorite drawing out of the three. The material used for the drawing is diverse, including pen and ink with wash over stylus and some white heightening. I particularly like how the figure at the far left has been highlighted in white to emphasize his movement up the staircase, a rather overt case of dynamism in a drawing.