Many artists live long lives filled with distinct artistic change as they age and grow wizened. Taddeo Zuccaro was not one of these, but due only to circumstances beyond his control. Zuccaro died, like Raphael, at the too-young age of 37, giving him a working life of just under 20 years. He was born on September 1st in 1529 in a small northeastern Italian town called Vado. Zuccaro moved to Rome at the age of 14. At the age of 18, he painted the decoration of the facade of the Palazzo Mattei. This was Zuccaro's "big break"; it was praised all over Rome, and it cemented his reputation as an artist and brought him a steady stream of commissions. Zuccaro began a career primarily as a fresco painter, in general tending towards large, expressive frescos during his life. His brother was an artist, as well as his father. He was buried in the pantheon, near Raphael.

Zuccaro is notable both for his talent and his prolific output; he often worked under pseudonyms, and as thus, putting together a complete record of his artwork is an extremely difficult and perhaps impossible task. He drew in a very quick, expressive style. His linework is extremely detailed but also very rough, suggesting active motion and a quick hand. His drawings that remain tend to be small, but a vast majority of his work was done large-scale, as frescos. For obvious reasons, many of his most important frescos no longer exist; the realities of pollution and degradation can destroy even the best preserved frescos. As such, his drawings become even more important; they offer us a window into his extraordinary frescos and his thought process as he drew.

Zuccaro's work drew me in with his strong, bold lines and the sense one gets when looking through his sketches that he was a very quick artist. Sources indicate that one of his greatest talents as an artist was a sort of inhuman speed in which he would draw; his sketches and drawings seem to support this, built of loose and strong strokes. Zuccaro clearly drew confidently, and his work (while very realistic) has a sort of almost cartoonish spontaneity and spirit to it that I personally find rather inspiring.

THE CULTIVATION OF SILKWORMS 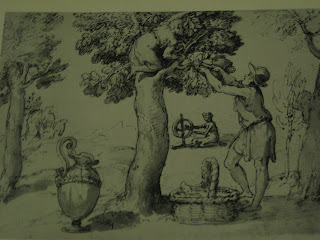 This drawing was done in pen and brown wash, and measures 170x247 mm. I find it an interesting sketch, expressing both Taddeo's skill at creating realistic images with quick, scattered lines and his control over line weight and scarcity to create active dimension and shape. The picture captures movement extremely well, and the tree is a brilliant use of linework to create shapes that seem almost whimsical. The drawing seems (to me) almost modern, and brings to mind drawings from the early 1900s and cartoons. 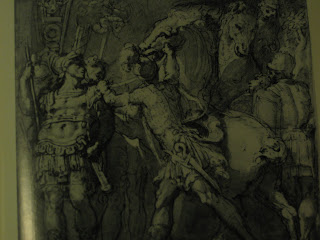 Fascinating linework in this one. The horses are very well drawn, again using scarce few lines. There is a certain sense of movement in this picture as well, with the lines drawn quickly and with a definite sense of motion to the one reining in the horse. The soldier on the left, however, is a perfect portrait of a casual stand; the soldier is a model of sedentary observation. Zuccaro's linework and composition all works to strengthen that impression the image leaves on the viewer. 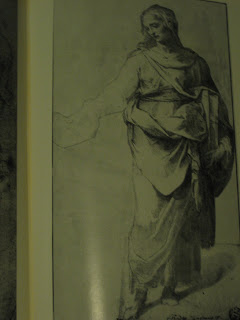 I thought this one was really cool. Zuccaro uses negative space effectively with St. John's right arm, making it seem as though it is almost an ethereal extension of his body. This one was done in brush and red wash. It's 242x135mm, though with the depth that Zuccaro expressed with his wash, it seems quite a bit larger (at least to me).