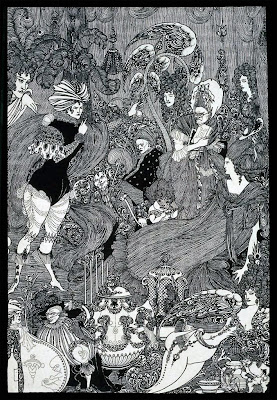 This drawing was also done for Alexander Pope's mock-poem, "Rape of the Lock." It depicts the scene in which Umbriel, a mischievous gnome, goes down to the Cave of Spleen to collect a sack of sighs and flask of tears to perpetuate Belinda's unhappiness after her lock of hair had been cut. In the spirit of art nouveau, the scene is quite ornamental with many flourishes, curls, elaborate costuming, and an overall decadence in the scene. Beardsley uses the spacing and density of the lines to create medium values in between the black and white. The direction of the lines is also very crucial in creating movement in the drawing and a hectic and tumultuous environment. Moreover, the onslaught of line work suggests the insignificance of the one lock of hair lost by Belinda. One lock of hair could easily get lost in this world of large hair and multitude of lines. This parallels and helps communicate Pope's message of how absurd Belinda is for getting so upset over one lost lock of hair.
"The Cave of Spleen" is also reflective of Beardsley's fascination of the mythical and grotesque, a prominent phase he was undergoing at this time. The characters transcend ordinary humans, with their menacing faces, elaborate headdresses, distorted bodies, and floating nature. Beardsley was inflicted with tuberculosis from a young age and was often confined as a result. He had plenty of opportunities for his style and imagination to develop the whimsical and eerie realms he invented.
Posted by Nina Wu at 3:50 PM