As I was searching for an artist’s drawings to study, I came across some of Leonardo da Vinci’s famous sketches.  His art is particularly interesting because he was a true “Renaissance man,” and his art reflects his many talents.  Da Vinci was born in 1452 in Italy. As a teenager he apprenticed with Andrea del Verrochio in Florence, and soon moved to Milan and served the Duke.  After working in Rome and France, he died in 1519.  Throughout his years he kept notebooks of drawings, including sketches of later famous paintings, anatomy, and ingenious machines.

I decided to use a study of his famous Last Supper masterpiece.  Da Vinci painted the piece under the patronage of Duke Ludovico Sforza between 1495 and 1498, and he finished his study around 1480.  His strategy, called historia, expanded on the work of the famous painter Alberti.  Beginning with The Adoration of the Magi, da Vinci told narratives through his paintings, but did not necessarily paint realistically.  In fact, The Last Supper is anachronistic in that it depicts a series of events within one snap-shot.  He dramatized Judas’ betrayal and the introduction of the Eucharist within one painting. 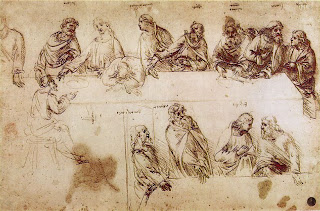 Although he possessed a mathematical mind, his study for The Last Supper exhibits his expressive style of drawing.  His sketches are rough, but the movements of the bodies and facial expressions are very dramatic.  In writings recovered with this study, da Vinci described the facial expressions and body movements of each of the disciples, suggesting that the narrative is as important as the painting itself.  His use of shading also tells a story. Jesus is the lightest figure, and he seems to be the light source.  His groupings of the disciples demonstrate his emphasis on telling a symbolic story through his paintings.  Da Vinci’s marks are very consistent, and even though the sketch is a rough approximation, it conveys the necessary shading and value, as well as the story line.

As my second sketch, I chose a study of hands (c. 1474) that is believed to be a preliminary drawing for the portrait of Ginvera de’ Benci.  As in the previous study, da Vinci calculated the position of each body part, in this case, hands, in order to communicate his intended message.  In fact, he seems to have adjusted the right hand at least once, as a "ghost" sketch appears in another more relaxed position.  Again, his style is expressive. As evidenced by the rough outline of the arms, da Vinci worked from the general to the specific, or made a rough outline before filling in the details.   A closer look shows that da Vinci used a hatching technique to create value and light. 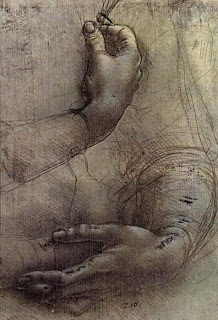 As my final sketch, I chose a study of another famous painting, The Virgin and Child with St. Anne.  The sketch, completed in the early 1500s, illustrates yet again da Vinci’s interest in depicting the movements and expressions of his subjects to tell a particular story.  His study differs from the final painting in that the drawing depicts the Madonna, St. Anne, and Jesus leaning towards the left, whereas the true painting depicts the movement towards the right.  His other studies for the same painting illustrate the three characters in different positions, which suggests that da Vinci struggled with his vision. 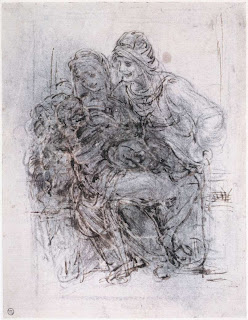 The sketch is very rough, and is barely decipherable, save for the facial expressions of the two women.  His expressive and rough style implies that he cared, at least in his preliminary drawings, about the movement of the painting, and drew and painted from the general to the specific.