Aubrey Beardsley, Cover Design for "Rape of the Lock," 1896 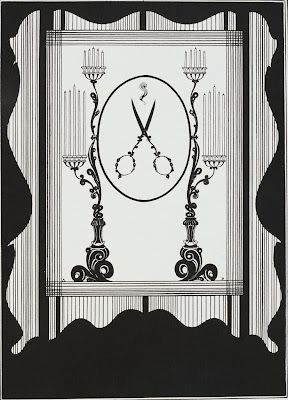 Aubrey Beardsley was a prominent artist in the art nouveau movement. Using pen and ink as his medium, his style takes on a graphic quality from the sharp contrasts between the flat black and flat white. This image is most fitting for Alexander Pope's poem, "Rape of the Lock," a story about a narcissistic Belinda whose lock of hair was cut off. Beardsley took on many illustration jobs for poems, plays, independent art magazines, and other publications. At this time, he was heavily influenced by French Rococo engravers. The use of ink in creating solid shapes and lines allowed for reproductions and printing easier so it could be dispelled to the rising literate culture. The ornamented border around the piece is like the cropping technique we used when learning about negative space in which Beardsley creates an illusion of looking through some sort of elaborate window. It also suggests a frame or stage for which we're about to view and witness a story about to begin. Beardsley's style is very detail-oriented, refined, and ornamental because he lived during post-Victorian England.
Simon Wilson. "Beardsley, Aubrey." Grove Art Online. Oxford Art Online. 22 Feb. 2009.
Posted by Nina Wu at 1:30 PM