The French painter Paul Cezanne has been called the father of modern painting. Though his paintings were ridiculed by critics through most of his lifetime (they were described as "dirty" by Manet), his art influenced the development of many 20th century art movements, such as Cubism. Described by George Moore as "the anarchy of painting, the art of delirium," Cezanne's paintings were an outgrowth of Impressionism.

The development of his style and the subject of many of his paintings was the provincial landscape, which is fitting as he was born in the idyllic on January 19, 1839. With his father comfortably established at the head of a bank, the young Cezanne enjoyed a comfortable childhood. In 1852, he attended College Bourbon, discovering his love for art. Afterwards, Cezanne decided to pursue a career in the subject in spite of his father’s insistence that he study law. The next few years were difficult for the artist as he attempted to define his style amidst the criticism his works received. Eventually, he met Camille Pissaro who served as a mentor and friend, teaching Cezanne to use primary colors to lighten the palette and short brushstrokes of color to establish an “impression” of the panorama. Towards the end of his life, Cezanne watched his works gain increasing renown, but he remained faithful in his pursuit of understanding color and art until his death in 1906.

I decided to write about Paul Cezanne because I have always enjoyed looking at impressionist art with its exploration of color and light. Cezanne’s paintings not only adopt these principles but also, in his words, reveal that color “is biological…is living, it alone gives life to things.” I liked his loose, yet accurate portrayal of landscapes and especially his use of color to convey perspective. In his time, this was a very radical method of painting, and I liked that he pursued his study of art despite the criticism surrounding his work.

The following work, titled The Poplar, was created using graphite around 1879-1882. The loose style and lack of straight lines and defined structures is characteristic of Cezanne’s portrayal of nature. It is very fluid and one gets the sense that the leaves are blowing in the wind. There is some use of perspective, as the tree in the background is smaller than the tree in the foreground and the use of shading was probably intended to be used as a study in the way light was captured by the landscape. 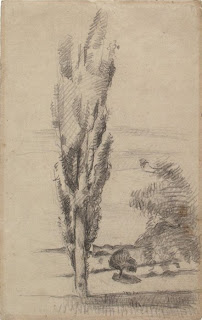 This painting, titled Chestnut Trees and Farm at Jas de Bouffan was painted in 1886. The subject of this work is Cezanne’s home in , which is in the south of . Characteristic of this area, the lighting allowed for Cezanne to use color to create perspective. Generally, Cezanne used darker colors to represent objects that are farther away. This shows the importance that color played in Cezanne’s work. In fact, Claude Monet who witnessed Cezanne in action noted that Cezanne used a black hat and a white handkerchief to establish the poles for color before he began painting. In this work, Cezanne demonstrates masterful use of color to represent light in the rendering of the sky—spots of white with specks of gold—and the field, especially the shaded areas beneath the trees. Again, his style is characterized by loose lines when it involves natural objects and geometric straight lines in his depiction of the house, and experimentation between color and light. 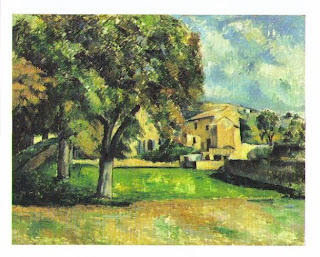 Titled The Bridge at Maincy, this painting was created by Cezanne in 1879-1880. The dominant element of this piece is the lush green of the trees and surrounding vegetation. In this experimentation with light, Cezanne paints the reflection of the bridge and trees on the water. The bridge however, is strictly defined by geometric shapes. The capturing of light and his strong use of color illustrate the beautiful landscape of the area. 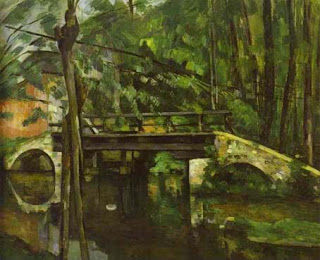 Just for fun…I found a (rather low quality) image of the modern-day Bridge at Maincy, the subject of the above painting. See the similarity? 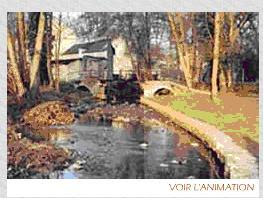 The Essence of Line. 26 Feb. 2009. The of Art. <http://www.frenchdrawings.org/search.php?quickArtist=cezanne&quickCategory=&submit=Search&searchtype=artist>