Aubrey Beardsley, "Pierrot of the Minute," 1897 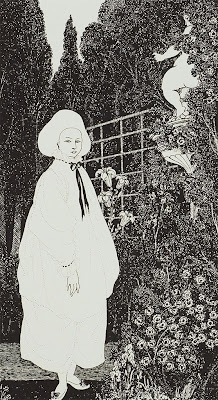 This drawing was published towards the end of Beardsley's life, where his style and subject changed with his conversion to the Catholic Church. He caused quite the stir (getting arrested for his provocations) during the beginning of his career with his grotesque, offensive, and avant-garde publications, but as his health declined he probably didn't have the energy to deal with this trouble, thus taming much of his work.
"Pierrot of the Minute" differs from the first two images in drawing style. Beardsley still uses the pen and ink, but the marks he makes are much looser, depending less on line making. It seems as though there's a Neo-Impressionist influence present in this drawing from the pointillist effect present. Beardsley utilizes a modified version of negative space, seeing the figures as the objects and the surrounding environment as the darker negative space. In the figures, he also makes use of contour line drawing, minimizing details in the figures, whereas the environment is quite detailed.
I chose to research Aubrey Beardsley because of my interest in art nouveau, and he was instrumental in it's definition. The style refines drawing to a meticulous focus and primarily makes use of lines. The detailed line work makes for a graphic finish and modern look, which almost seems anachronistic for the time period. Beardsley died at the age of 26, but managed to establish a firm hold on his style in his short career, for which I appreciate his achievements and grotesque aesthetic. He managed to pioneer an aggressive avant-garde movement with a few intricate lines, which I find to be very impressive and what art is all about.
Posted by Nina Wu at 4:06 PM