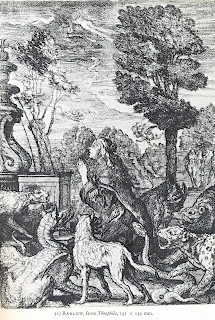 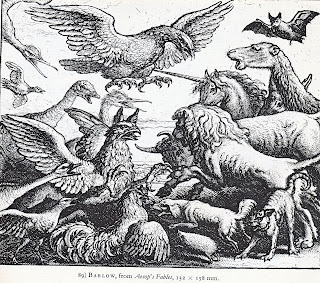 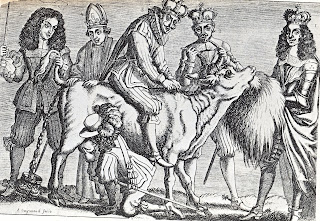 Francis Barlow was an English illustrator, painter and etcher (1626-1704). He is considered to be one of the first masters of English illustration. His fire famous piece of work was for Edward Benlowe's Theophila, a 268 page religious poem. For the poem, Barlow created 12 illustrations, the first time he had ever done interpretive drawings. In the first picture, Barlow shows Theophila kneeling before the Fountain of Christ, surrounded by growling animals with Adam and Eve in the background. The detail that went into this piece is quite amazing, especially since this was etched onto a metal plate. The various directions of the lines were quite important to ensure detail was not lost. The different values are created by the distances between these lines, the closer the lines, the darker the image.
Barlow is also famous for his illustrated edition of Aesop's Fables, which, unlike Theophila, mainly depicts animals. In the second photo, Barlow shows animals' in motion in a very realistic way. Once again, although this is an etching, the distinction between each animal is not lost because of the finely detailed lines.
Barlow was also one of the first English political cartoonists. In the last picture , he depicts the King of Spain riding on top of a cow representing Holland. Beside them are the King of Denmark, Louis the XIV and the Bishop of Munster, with an unidentified prince drinking Holland's milk. This picture shows a more purposeful side of drawing with a parody of political figures.
It seems that Barlow did not just draw for his own enjoyment. He actually typically had an external reason to drawing, for a job or for a message. It is a shame though that it seems he died of poverty.