In some circles, the German Renaissance is called the “Age of Dürer”, after the renowned engraver, painter and graphic artist born in Nuremberg on May 21st, 1471. Albrecht Dürer, named after his father, a goldsmith craftsman, preferred the expressiveness and representational possibilities that painting offered, as opposed to his father’s trade. He switched his apprenticeship to the former discipline by the end of 1486. Dürer's time was one of upheaval and plague, since while Europe was shaking off its Middle Age cobwebs to embrace the new ideas and paradigms that the Italian Renaissance hinted at, it still had to cope with the occasional siege that malaria or some other virulent strain could inflict on a city. Two plagues that ravished Nuremberg in 1494 and 1505 presented Dürer with the opportunity to visit and learn from Italy, the most significant artistic center in Europe at that time. While Dürer’s most prolific period began in 1495 and extended to about 1510, the three works I wish to highlight were engraved in 1513-1514, when Dürer’s mastery of copper engraving had reached maturity, and constitute an allegorical trilogy concerning the different spheres of human action and knowledge. Dürer fell ill and died extremely suddenly in 1528, at the age of 57. By then, he was already one of the most renowned artists in Europe. Personally, I've come to really appreciate the visual effects possible with engraving and Dürer's pieces, together with Gustave Doré's, are some of my favorite in this medium.

The first work is Knight, Death and the Devil (1513), which features a riding knight framed by two frightful creatures, representing Death and Satan, respectively. The knight is a paramount example of the via activa, the life of action and deed. In stark contrast to the St. Jerome engraving, the knight is out and about in the world, defining it with the help of this spear and steed. The far away city is perhaps indicative of the knight’s destination, or hometown, and highlights his impact on the lives of others. Yet, the two somber figures that stare at the riding man remind us of the perils inherent in the world of deeds. Danger is ever-present, and it is only time that stands between the rider and the final rest, as Death’s hour glass grimly indicates. Even worse than physical decay, the possibility of moral corruption haunts the rider’s steps like a shadow, with the grotesque form of the Devil expectantly following the knight, waiting to take advantage of the ethical struggles inherent in warfare. 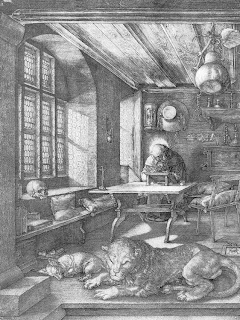 Following the via activa, Dürer highlighted the via contemplativa, in St Jerome in his Study (1514). What I find most striking in this work is how Dürer manages to masterfully convey light and its effects on different types of surfaces, such as the stone columns, and wooden table, with what is fundamentally a binary value. Unlike pencil, with a broader range of available grays, Dürer’s copper engraving use a much more uniform ink and it is basically the differences in ink concentration that denote darker or lighter areas. As Erasmus of Rotterdam pointed out in 1528 about Dürer’s engravings, “these things are placed before our eyes with the most felicitous lines, and black ones at that, in such a matter that, were you to add colour, you would not do justice to the work” (Moser, 2005). I also find the juxtaposition of the tidy home with the resting lion inside it, although a symbol traditionally connected to St. Jerome, to also highlight the dormant inner turmoil that is housed in the external trappings of order and social restraint. Also like the previous engraving, this one prominently features a skull on the left-hand side, perhaps as a further reminder of the omni-present reality of physical extinction. 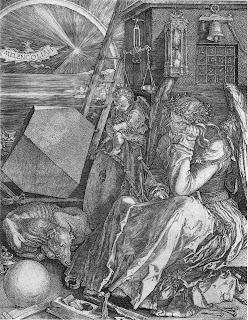 We end with my favorite Dürer work, Melancholia (1514), which in a sense complements the arenas of human inquiry and action that were explored in the previous two works. Although the previous two engravings made some use of hyper-realistic elements, such as the Devil and St. Jerome’s halo, these elements take center stage in this work, which can be viewed as a collection of symbolic entities. There is no single, fully accepted interpretation for the overall significance of each of the components of this engraving, although the overarching themes seem to be imagination and reason. References to mathematics (such as the polyhedron, the sphere and the magic square), architecture (tools), and the otherworldly (angels) highlight the different intellectual realms. The magic square reference is the first in European art and, at the time, was heavily linked to astrology. True to its title, there is also an underlying despondency in the work, with both angels and the lamb displaying rather somber expressions. Finally, beyond the different single and compound symbolisms, one can appreciate the wonderful line work used to produce different values and textures. For instance, the polyhedron features a dotted texture, while the water behind it consists of a series of horizontal lines of varying intensity. Also, the way the larger angel's dress folds and flows beautifully contrasts with the regular, geometric lines of the polyhedron and the sphere, in a way emphasizing the intellectual difference between them as well.