Edgar Degas was born in Paris on July 19, 1834. He began painting early in life, but his father expected him to go to law school. Because of his father's wishes, he enrolled at the University of Paris to study law. A few years later he met Jean Auguste Dominique Ingres, whom he admired for his work. Soon after, Degas went to the Ecole des Beaux-Arts and followed Ingres's style. Degas spent much of his life learning to draw and paint by copying in the Louvre and looking at other famous artists' works. He is mainly known as an Impressionist artist, but he never wanted to be called that, nor did he think it was accurate.

I chose to do Edgar Degas because I love his paintings of dancers. As I started to research him more, I realized that he is also very well known for his drawings and studies that he conducted in preparation for paintings and other mediums. The pictures I chose to include offered a variety of styles and mediums. For example, "La Korrigane, Act I" is very detailed and precise, whereas "Melinda Darde" is very loose and free. Also, "Portrait of Manet: studies" is done with crayon and ink wash, versus "Dancer Resting," which is done with black and white charcoal. In "La Korrigane, Act I" Degas used horizontal lines to shade the sky and ground. For "Portrait of Manet: studies" he used an ink wash, which makes the shading very abstract and fluid. Even though many people only think of his dancer paintings, he was very talented in many different styles and mediums.
"Melinda Darde" 1878; black crayon on paper 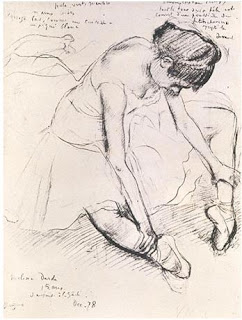 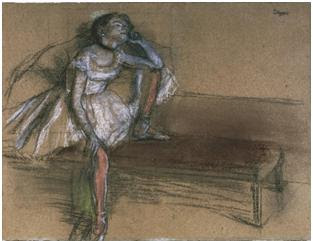 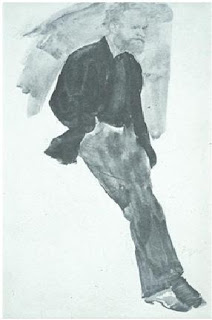 For the drawing "La Korrigane," I'm really sorry but I could not get the scanners to work. The drawing was in the book Degas and the Dance in Lilly. I also could not find a copy of the picture online that I could put in the post.
Sources:
ARTstor Collections from the Duke Library System
http://library.artstor.org/library/welcome.html#3search1Degas20drawingMultiple20Collection20Searchtype3D3126kw3DDegas20drawing26id3Dall26name3D
Wikipedia- Edgar Degas
http://en.wikipedia.org/wiki/Edgar_Degas