Georges Seurat was born in Paris, France on 2 December 1859. He first studied under the sculptor Justin Lequiene and then attended the Ècole des Beaux-Arts in 1878 and 1879. He greatly influenced the direction of modern art by initiating Neo-impressionism with works like his most famous piece, Sunday Afternoon on the Island of La Grande Jatte.
Seurat is most famous for his painting using the pointillist painting technique, while his drawing often remain overlooked. Before he began his major paintings though, Seurat was all about drawing. The majority of the existing drawings from Seurat are from this period before his paintings and they seem to have their own unique quality to them, not directly relating to any of his later major works. There are some drawings that do have a slight correlation, perhaps beings studies for his paintings, but even in these, the distinct visual representation used in his earlier drawings exists. Seurat’s drawings greatly influenced the development of modern drawing.
Seurat’s drawings often present a paradox. His technique incorporates very clear figures, while adding an element that creates a sense of ambiguity. A common characteristic attributed to Seurat is the liberation of the Line. Rather than using this element as the rigorous structure that it most often is, he used an abundance of lines, which seemed to swallow up the idea of line. Seurat believed that art was the only place that two mutually exclusive realities could be synthesized and developed into a harmony of opposites. When studying Seurat’s drawing one might find that his work is hard to describe. The subjects seem to be fleeting and the meaning of his work is often rooted in our own perception of the subjects as existing in the drawing.
The drawings are mostly done on a type of paper called Michallet. This is a French handmade laid paper made using a paper mould. This mould uses metal rods across a frame on which wet pulp is laid. The rods cause the paper to form laid lines, which are parallel lines of alternating thick and thin pulp. There are also chains used to hold the rods in place that form chain lines. A key element of Seurat’s drawings comes from incorporation of these lines into his work. Seurat’s choice drawing tool was the Conté crayon. In order to manipulate the crayon, he used stumping, erasing, and at times a scraper (sort of subtractive techniques like we have used in class).
This past summer in New York, I was able to see a performance of the musical Sunday in the Park with George. This musical, written by Stephen Sondheim, is based on the life of Georges Seurat and his creation of Sunday Afternoon on the Island of La Grande Jatte. I loved the musical. I was browsing the books in Lilly and found his drawings. I was immediately drawn to his way of representing the world. I find his drawings to be very engaging, really attracting a viewer to the image and its paradoxes. 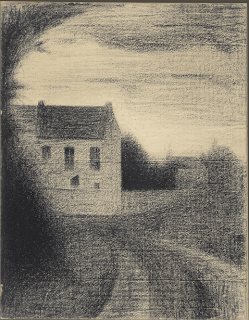 Square House. c. 1882-84. Conté crayon on paper. 12 1/16 x 9 3/8"
http://z.about.com/d/arthistory/1/0/9/a/sd_06_housesq.jpg (link for a larger image).
This drawing is an example of Seurat's use of the laid lines and chain lines created during the formation of his paper. The lines become an element of the picture itself, being incorporated into the overall structure and adding to the ambiguous feeling that often accompanies Seurat's drawings. 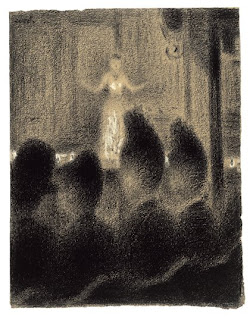 At the Concert European. 1886-88. Conté crayon on paper. 12 3/4 x 9 3/8"
http://www.moma.org/calendar/poprally/images/_seurat.jpg
This image is not only a wonderful example of the style and idea of Seurat's work, but it also shows one of his favorite types of subject, Amusements of the people. 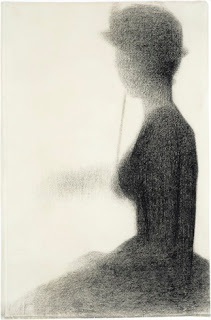 Seated Woman with a Parasol. 1884-85. Conté crayon on paper.
http://www.newyorker.com/images/2007/11/12/p323/071112_seurat02_p323.jpg
This drawing shows an occasion on which Seurat did drawings as studies for his later paintings. This particular one is for Sunday Afternoon on the Island of La Grande Jatte.