Versatility in the Italian Renaissance

The Italian Renaissance was a time of rebirth, and one of the forefront leaders of this change was Michelangelo. Michelangelo was born on March 6, 1475, in Caprese Italy. He was born into a family who owned a financial business. After a while, his father realized this lifestyle was not for Michelangelo and he let him work at a paint shop, and that is where Michelangelo first picked up some of his painting styles. A year later he moved into the powerful family of Florentine ruler Lorenzo the Magnificent. This gave Michelangelo social power and he was now able to study under respected sculptors, and he was influenced greatly. Michelangelo was set up early in life to have a major impact on art, and he did with his sculpture of David, and the ceiling of Sistine Chapel. 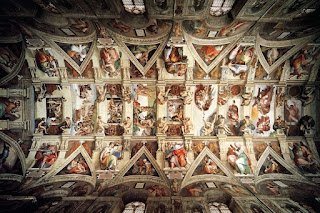 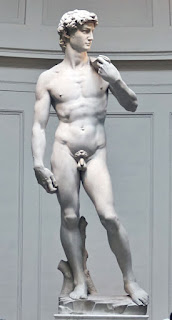 One of Michelangelo's most famous works was the statue of David. He completed this sculpture out of a 17ft piece of marble. Many artists tried to complete this task before but it couldn't be done. Michelangelo continues to show that he can leave a legacy behind in many different forms of art, wether it be a painting, or a sculpture. He was so versatile. 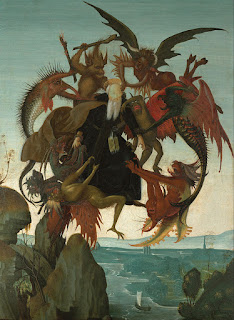 This painting is called The Torment of Saint Anthony. It was completed in 1487-1488. Michelangelo was around 12 to 13 years old when this painting was completed which is so impressive. It is an oil and tempera painting.