One of the most powerful interpretations of the world around someone contains a reflection of oneself. Frida Kahlo dedicated her life’s work to this pursuit. She was known for her unapologetic self-portraits, which showcased her unique femininity and attitude towards the world. The way that Frida depicts herself, unapologetic of her natural facial hair, and physique is empowering, but her fixation on her husband, Diego is also evident in her artwork. The two subjects are slightly contradictory in her expression as an independent-minded woman, but her highlighting her flaws and humanity is what draws me to her art. She lived a short life, born on July 6, 1907 in the “Blue House” in Coyoacán, Mexico, and died at the unfulfilled age of 47. Frida was a polio survivor, but dealt with the havoc wreaked on her body from the age of 6. 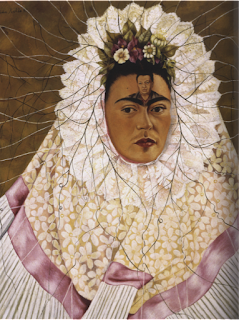 She used her self-portraits to portray her deepest emotions and share her desires. In Diego en mi Pensamiento, she paints her adulterous husband on her forehead to indicate that he is always on her mind, she wants to be his only object of desire, and so she also paints herself in traditional indigenous Garb that she knew he admired. 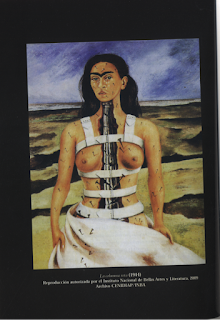 The desire for her husband’s undivided affection ran so deep that she painted physical manifestations of her internal pain. La columna rota, in particular captures the desolation of Frida’s personal struggle. From the empty and arid background to the nails bored into her entire body, the pain she feels is evident. The column that replaces her spine and the belts sustaining her form are symbolic of the health problems she developed later in life. I believe that the “broken column” is also symbolic of her relationship with Diego Rivera, her husband being the lone pilar supporting her is compromised, and with that so is her existence as she is left alone and in agony. 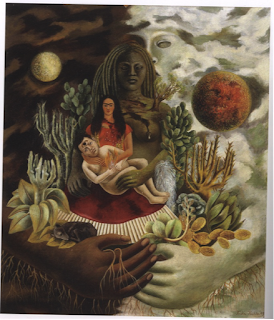 The title of this painting translates to “The love embrace of the Universe, the Land, Diego and I and Mr. Xótotl.” This portrait stood out to me as a hierarchy of nurturing. The universe contains the earth, which sustains Frida, who is caring for her dying husband. The depiction is almost spiritual, in acknowledging her place in the universe, and her husband’s place in her’s.