Olivier Rousteing was born in Bordeux, France in 1985 and eventually moved to Paris and to study at the ESMOD, the Ecole Supérieure des Arts et Techniques de la Mod. He graduated in 2003 and began his career as a designer at Roberto Cavalli and became the head of the women’s division. In 2011, he was named the creative director of the Balmain Fashion House when he was only 25 years old. Rousteing is the youngest creative director of couture fashion house since Yves St. Lauren headed Dior in 1957. His laudable craftsmanship, attention to detail, youthful flair, and social media savvy has led to an increase of revenue within the Balmain house within the past four years.

Characterized with exuberantly hued fabric and elaborate stitching , Rousteing’s work continues the Balmain Fashion House tradition of intricate embroidery, but with a modern twist. Rousteing’s bold, modern designs brings high fashion couture into the 21st century, as he attempts to mitigates the divide between luxury and popular culture. Signature variations in lattice, intricate macramé gowns, tribal-looking patterns, and designs including involved geometric prints and symmetrical designs are Rousteing signature. The pristine craftsmanship of Rousteing’s products make his expensive designs coveted by high-profile clients, but his bold work is still disdained by others. 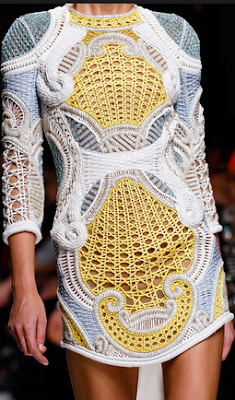 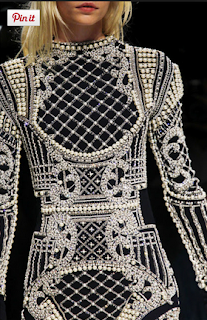 Classic couture fashion to be Rousteing’s toughest critics. His ostentatious and extravagant interpretation of couture fashion is unique, but not always appreciated. Couture is fashion made by hand explicitly for one individual wearer’s exact specifications; it takes thousands of man hours just to make one dress.Couture items are one of a kind and the highest quality fashion available. Considering couture originated in Paris, Rousteing possesses a certain pressure to uphold the current standard of couture: easy and glamorous fashion without being bold or ostentatious .[6] Some critics believe his signature bedazzled clothes and ostentatious stitchwork threaten the tradition of French couture. His bold, in-your-face designs boast intricate lattice-work and highly textured pieces. Other designs play with stripes, sheer, and colorblocking, “offsetting oranges with purples, navies, yellows, and greens, adding texture with lace and billowing pleating fabric.” Some say Rousteing’s involved designs are gaudy and overdone, but others commend his bold style. Balmain had always set extremely high standards for couture and Rousteing’s interpretation certainly upholds the standard of quality, but changes the sentiment of the aesthetic. 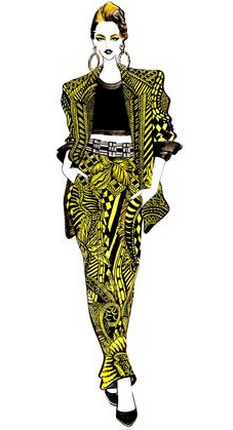 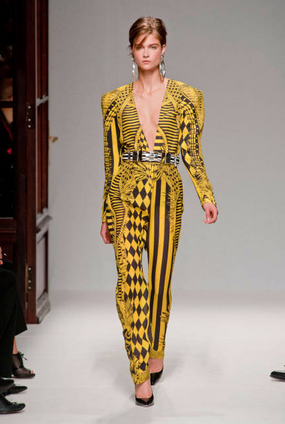 Rousteing’s as an artist is intriguing to me because of his obvious, involved captivating work, but also because of the manner in which he is leveraging his position to create a social statement. As a young minority, he is changing the reputation of French couture as a removed, out-of-touch society to a fashion statement that can be received and understood by individuals from all walks of life. His use of social media and popular culture celebrities has brought French couture into the public sphere, and he is known for utilizing more minority models than usual of couture houses. Although Balmain remains extremely expensive, the message behind the clothing can not only be comprehended by the wealthy. Rousteing's designs boldly evoke a sense of confidence and a dauntless attitude, yet keeping a sense of refinement with its intricate craftsmanship and attention to detail. His designs have allowed everyone to take a peak into the fashion and lives of the elite and provided an appropriate space for one to flaunt their peacock feathers, unabashedly. 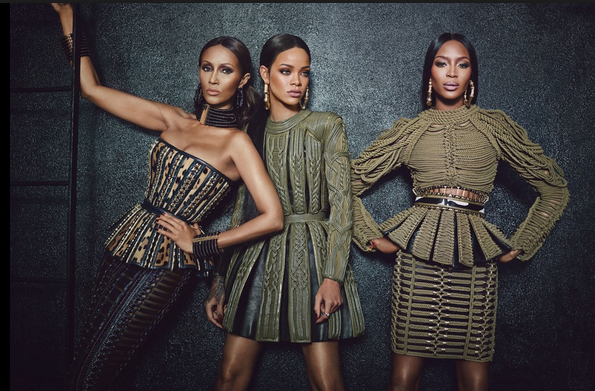 Rousteing often utilzes minority models and popular culture celebrities within his campaign. “They represent the fresh, diverse and open spirit of a new generation of fashion,” says Rousteing.