Born into a prosperous Parisian family on 19 July 1834, Edgar Degas spent his entire career challenging the values and standards of art.   As identified in Christopher Lloyd’s biographical work, Edgar Degas: Drawings and Pastels, Degas stands at the threshold of modern art. (8)  Over the course of his study of art, he has engaged in a multitude of art forms and mediums.  He started as a traditionalist, producing works in the style of genre, history and portrait paintings.  However, by the 1870’s, he became associated with contemporary subjects and the Impressionism movement.  In her text “Joseph Conrad and Impressionism,” Eloise Knapp Hay describes the movement as “the first truly modern movement in all the arts because of its stress on fidelity to sense impressions.” (137). As discussed in Lionello Venturi's "The Aesthetic Idea of Impressionism", impressionist painters painted in reaction to the reflex of light, either real or imaginary.  In essence, the artists of this movement painted the appearance of reality through the expression of opposing colors. (34) Though his fame is attributed to his contribution to the movement, as explained by Lloyd’s piece, he preferred to align himself as an independent, instead of a single group. Nonetheless, his methods remained consistent throughout his career.  In the early stages of any artistic construction, Degas produced a great variety of study drawings and notes to record and study a single subject in the piece. As stated by Lloyd, for Degas, “drawing was an instinct” and “painting was an artificial construct.” (8) His finalized products that are most popular are results of close and vigorous examination of subjects and focus points in mixed materials. 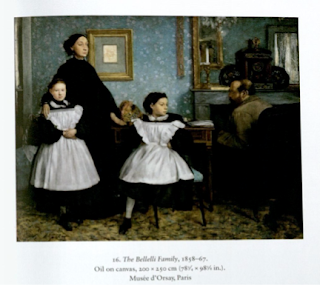 After three years of study at the Ecole des Beaux Arts, Degas spent three years visiting Italy.  The Ecole aimed to create a standard of artistic practice, however, Degas aimed to avoid such strict instruction while residing in Italy.  He distanced himself from the Villa de Medici, which was run by the Ecole due to his efforts to become, as Lloyd states, “an artist in spite of the system rather than because of it.” (10) In Italy, he worked within family circles.  He spent a majority of his time with the Bellini family, a powerful family living in exile from Naples for political reasons.  As shown above, he aesthetically examined and painted the family.  What is absent from this piece is the sense of the amount of preparatory drawings involved in the construction of this painting.  He created numerous studies drawing in mixed mediums to prepare for the final piece.  Lloyd describes his use of mix media in his work, by stating “pencil and chalk are used sometimes in combination, body color and touches of pastels are introduced for heightening” In this painting, Degas captures the family’s predicament at the time.  The piece is set in an apartment in Florence, and there is an atmosphere of disengagement and passive aggression evoked by the positioning of the figures.   As identified by in Lloyd’s text, Laura Bellini shields Giovanna Bellini while Giulia Bellini sits nervously on her chair.  Gennaro Bellini is seen only in profile with his back to the viewer.  The composition of the figures reveals the difficulties of living in exile.  The figures appear aloof in the space, and set against a background of rigid forms.  Furthermore, the use of oil on canvas creates a heightened attention to texture and shading.  Overall, the stylistic decisions employed by Degas enforce the degree of difficulty the family was facing. 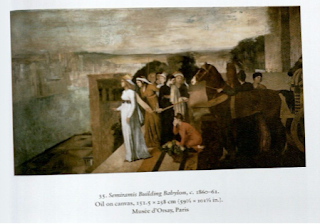 At the start of the 1860’s in Paris, Degas began to produce works in the genre of history painting.  As stated by Lloyd, the works of neoclassical painter Jean-Auguste-Dominique Ingres and French romantic painter Eugene Delacroix inspired Degas during his time in Italy.  He was not alone in depicting the story of Semiramis; rather, this story was dominant in the language of representation.  In the piece above, the queen of Babylon, Semiramis has just arrived by chariot.  She is attended to by her attendants, and is standing on the terrace of her palace overlooking the city of Babylon.  In similar fashion to his past work, he made numerous studies for this piece, and the final product was created in oil on canvas.  However, instead of just examining the poses, he was also interested in accounting for the historical details of the costumes, accessories and appearance of the city.  In this case, there is an added focus on intellectual content in his stylistic decisions. 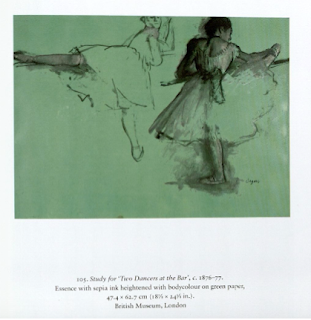 Towards the later half of the 1860’s and the early 1870’s, Degas changed his direction.  Rather than depicting images of the past, Degas realized he preferred examining and accentuating modern subjects.  The start of the 1970’s also marked the birth of Impressionism.  Degas is most well known for capturing the Paris ballet scene in a variety of mediums, such as paintings, drawings, pastels, and gouaches.  This large series of works were immediately popular in the Paris art scene and still are relevant today.  In the early stages of this series, Degas kept his distance.  He would only view performances from a seat in the auditorium.  This allowed him to have access to a great variety of viewpoints and dramatic effects of cropping, foreshortening, and contrast.  In time, he gained access to the backstage areas where rehearsals were conducted.  Lloyd associated ballet as a metaphor to Degas’s life as an artist.  By emphasizing the technicality and physical commitment to the dance, he was portraying an artist’s dedication to his or her own craft.
Degas’s methods to depict his subjects also set him apart from his contemporaries.  He would first observe the poses from life in dance classes.  He would then ask for individual dancers to model for him in the studio for a final pose.  For these final drawings, Degas mainly used tinted paper, which was squared for enlargement.  This frame would create a dynamic angle of the subject.  In these pieces, he would focus on how the differentiations of texture, skin and satin respond to the dancer’s physical mobility. 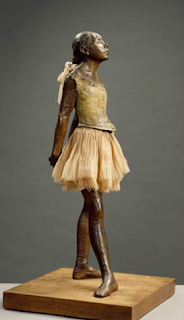 As a testament to his radical use of subject and medium, Degas also experimented in sculpture.  Little Dancer Aged Fourteen was the only sculpture exhibited by Degas in his lifetime.  This sculpture was shown the sixth Impressionist exhibition in 1881, and it was the only sculpture shown by Degas in his lifetime.  The figure itself was modeled in wax and supported on metal armature.  The sculpture was then casted in bronze following the artist’s death.  The sculpture evokes qualities of realism particularly in Degas’s decision to dress the model in real fabrics, such as a skirt, bodice, ballet shoes and a wig made of real hair. Degas produced about 26 study drawings of the dancer from many viewpoints to specify the curvature of her spin, the position of her feet, and the angle of her head.
Image e. Haggarty's Perfumes Billboard, 1946, 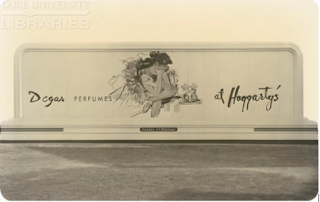 Throughout his life, Degas suffered from a progressive retinal disease, which increasingly deteriorated his eyesight as he grew older.  As a result, he reached a point in his career where his vision was too poor to continue.   However, as seen from the image above, his legacy still lives on today. This 1946 billboard was created by Haggarty’s Perfumes. In this instance, the viewer is able to conceptualize how Degas’s work has been transformed and commercialized to fit the standard of the modern age.  I chose Degas for this assignment because he is been my favorite artist.  As an art history major, I find his diverse array of subjects and materials incredibly impactful in art history.

Hay, Eloise Knapp. "Joseph Conrad and Impressionism". The Journal of Aesthetics and Art Criticism. The American Society of Aesthetics. Winter 1975

Venturi, Lionello. "The Aesthetic Idea of Impressionism". The Journal of Aesthetics and Art Criticism. The American Society of Aesthetics. Spring 1941.