Born in Italy in the 15th century, Leonardo da Vinci is known first and foremost as a renowned painter, the Mona Lisa and The Last Supper being two of his most famous works. The scope of his work was unprecedented, for the subjects he drew and painted were not limited to the human form. His interests extended also to architecture, science, music, geology, astronomy, botany, and occasionally his own inventions. This breadth of material is what drew me to da Vinci. It's easy for a budding artist to default to what he or she is comfortable drawing, painting, or sculpting. Da Vinci, however, was always exploring new content and widening his range of expertise. His work in anatomy in particular drew my attention more closely. 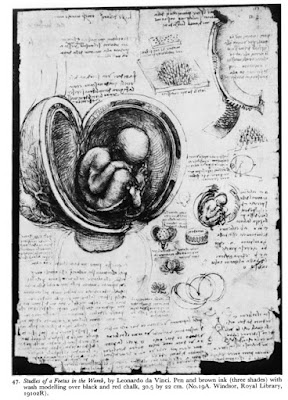 Studies of a Foetus in the Womb (c. 1510) [1]
Medium: Pen and brown ink with wash modeling over black and red chalk.

In this first drawing I see a lot of shading and value, especially around the unborn fetus itself. The womb is 'cut,' showing an internal section. Though this drawing is not as detailed as his others, it does show da Vinci's growing understanding of anatomy as a pupil of Andrea del Verrocchio 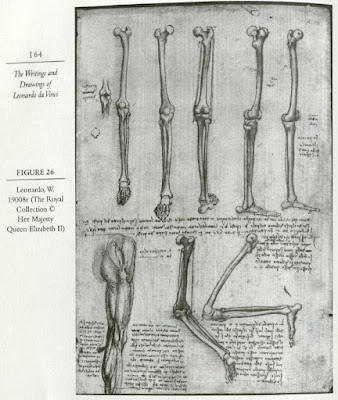 Here I see less shading and value but more weight on the lines than in the previous drawing. The multiple perspectives remind me of our first assignment which required us to draw the same content from two different angles. Da Vinci shows a bit more detail in this piece, which is currently held in The Royal Collection in the United Kingdom. 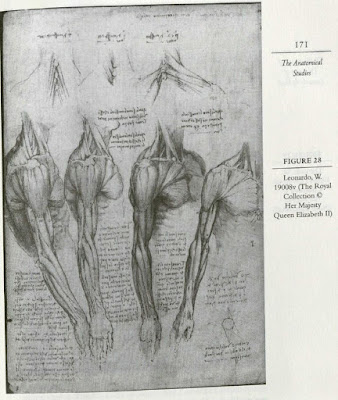 This drawing, among many others, was completed after the dissection of cadavers in various hospitals around Europe. Da Vinci was allowed access to these cadavers after establishing himself as a successful artist. Like the previous drawing, here da Vinci shows a marked use of lines to convey weight and texture in addition to traditional shading.