The famed architect Frank Lloyd Wright lived during the most transformative years of American history and for this reason his work ushered in a renaissance of architectural advancement that transformed architecture into a modern dynamic and innovative field. Born at the close of the Civil War and active until the dawn of the Space Age, Frank Lloyd Wright’s brilliance was in using materials new to engineering, such as concrete, steel, reinforced concrete, sheet metal, plate glass and plastics to make buildings unlike those of the past and ever more congruent with nature. Frank Lloyd Wright oftentimes described his buildings as “organic” and strived to meld the new, modern materials of the time into designs that added to natural beauty and did not detract from it. His pioneering work helped turn future architects away from taking minimal advantage of new methods and technology, such as piling traditional stone masonry onto the sides of modern steel frames, and instead inspired future architects to take full advantage of the new methods and technologies available to the science of engineering and architecture. As a Mechanical Engineer I am especially drawn to the works of Frank Lloyd’s Wright as they are a clear connection between the ability of creative and artistic brilliance to promote the accelerated advancement and acceptance of engineering innovation.

Frank Lloyd Wright’s love for organic architecture was deeply tired to his love of Japanese architecture and art. In fact, he oftentimes dealt Japanese art prints to those who used his buildings. His ability to meld grand structures with their natural environment is evident in how his design for the Second Imperial Hotel (c. 1913 - 14) in Tokyo, Japan seemingly sprouts from the surrounding forest. Its integration of fauna into the central portion of the structure demonstrates nature’s primacy. 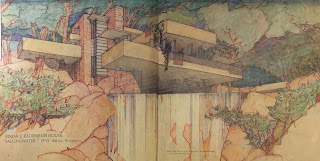 Perhaps his most famous design, Fallingwater (1935) is a clear demonstration of Frank Lloyd Wright’s drive to make buildings fit naturally with their environment. The house is built in such a way to eventuate the natural waterfall and not disturb it. To accomplish this Wright employed some truly phenomenal engineering techniques that required the use of materials that were mostly unavailable only fifty years before.

Appropriately, Wright designed Midway Gardens in Chicago, Illinois (1913). Inspired by the German experience of being among the trees, plants and flowers while dinning, listening to music and drinking Wright worked to design a place where Americans could more directly integrate the natural world into their daily lives. Unfortunately, the business venture that commissioned the property shortly went bankrupt and the new owners decided to demolish the project. To Wright’s pleasure, the buildings were so well constructed that the demolition company lost money on the contract to level this facility.