Trisha Brown and the "corporeal vocabulary":

Trisha Brown is a maker of conceptual art. She has contributed to the disciplines of dance, conceptual artist and illustration. She practiced in circles with other notable composers responsible for the innovation of conceptual art which art historians classify as a series of Happenings. Other well known artists of this community include Robert Rauschenber, John Cage and Yvonne Rainer. The first Happening was recorded in 1952 and sprung from the culture and environment at Black Mountain College in North Carolina. These artists defied limitations set arbitrarily by formal and rigid classifications based on the medium: sculpture, drawing, painting, dance, music, etc. These artist were interdisciplinary thinkers and were driven by passion for idea and action, not limited by form nor medium.

Trisha Brown’s career is primarily documented as dancer. She was the head of the Reed College dance department in Portland Oregon for two years before she moved to California where she met Yvonne Rainer (another conceptual artist , dancer, poet and filmmaker). Brown made a living as a choreographer. She kept meticulous notes of the conceptual ideas she explored in dance.

In his text, If You Couldn’t See Me: The Drawings of Trisha Brown, Peter Eleey references Max Kozloff to define postminimal sculpture as “symbol of an action process, about to be commenced or already completed.” When presented with an empty stage and the knowledge that a dancer is behind the curtains, we don’t know if they have already passed through or if they soon will. The anticipation of a stage can be compared to that of a blank page. Brown dismembered time on the page; she created movement with line as if there was a waiting and then a passing while looking at a static drawing as illustrated in New York, Handfall (#5) 2005: 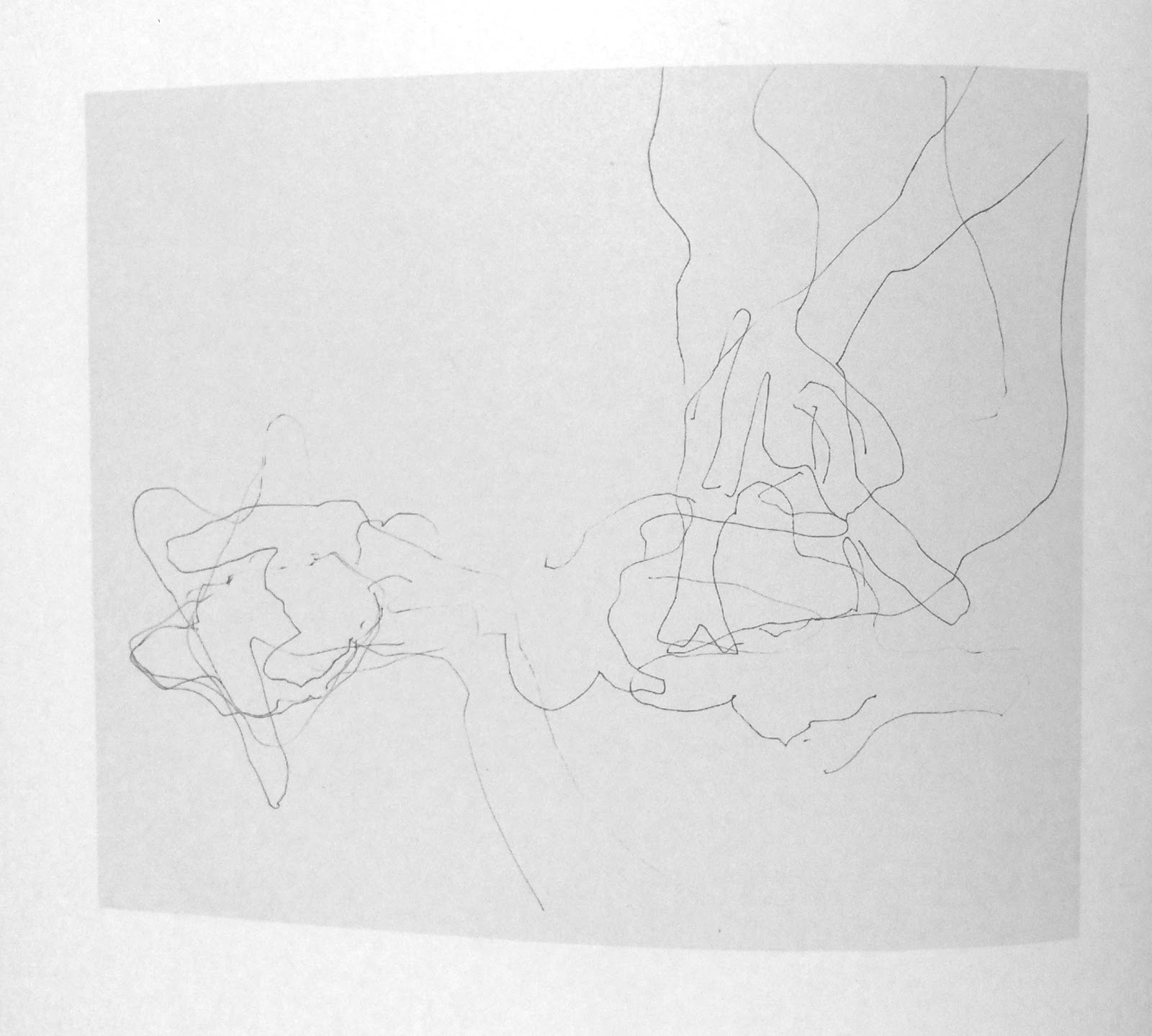 Although she drew the image above with her hand, Brown was interested in the way that the body and the mind worked together to create gestural lines that communicated in a way that text and words were unable to. She explored various “corporeal vocabularies” and conceived that our backs, limbs, head, etc. and the way those objects worked together as a system were a language of their own right. Most of her drawings were of the way that these elements worked within the body, and it wouldn’t be until later in her career that she would explore the way the body moved through space. Below is an example of one of the alphabets that the movement of our bodies’ simple shapes and lines make, Untitled 1973: 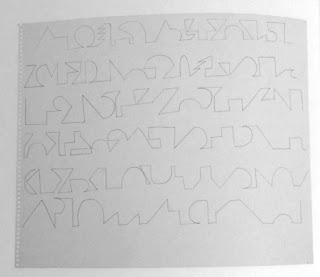 And lastly, the images that appeal most to me are a series of drawings that she made with her entire body (charcoal, ink, paint)  against the paper, which was laid out on the studio floor. In this series, Eleven, made in 2003, Brown sought to marry the way the body “draws” with the way the mind “draws”: 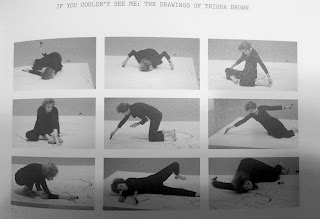 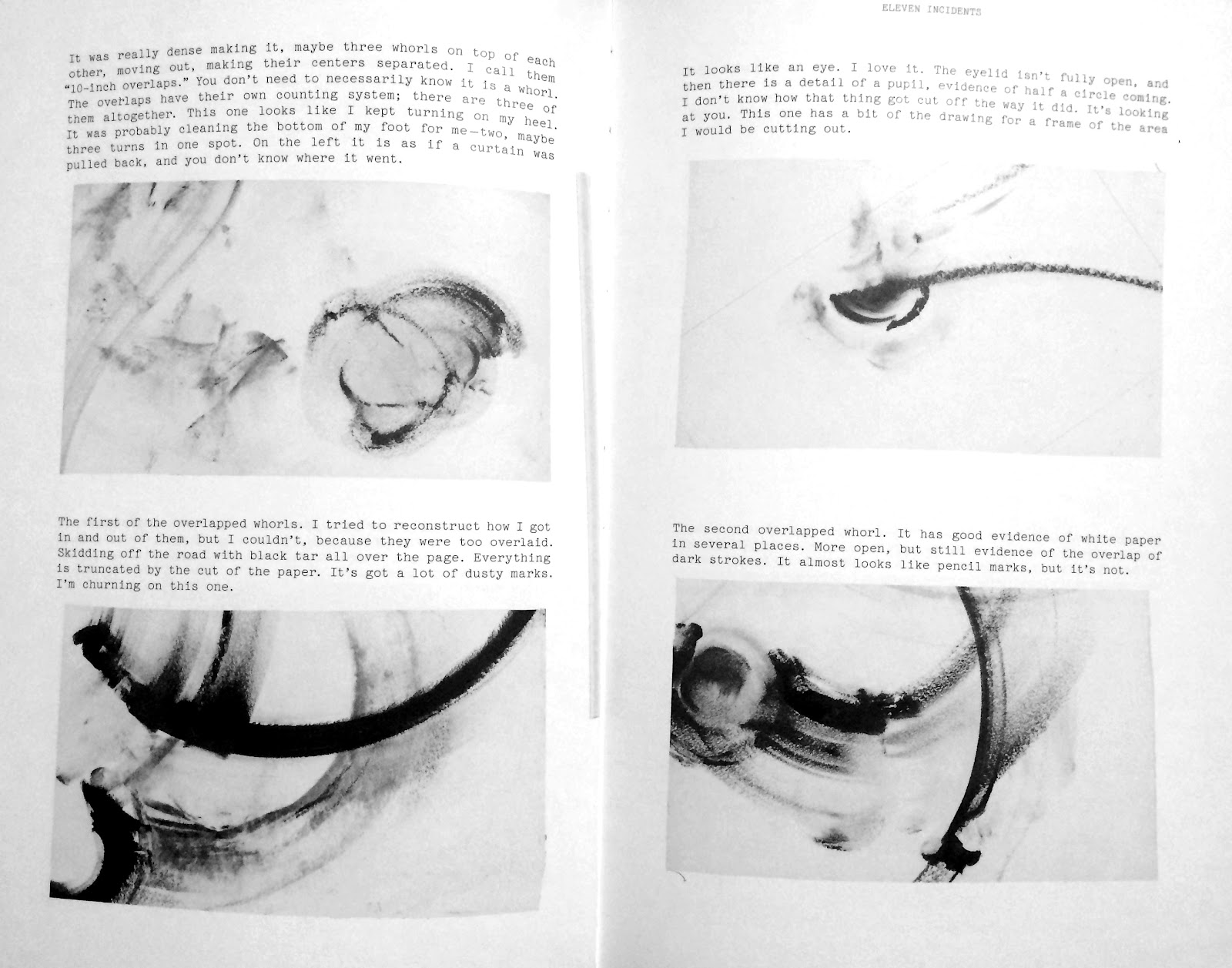 It is too common to come upon a recreation of something which is an exact representation of the way we optically experience that thing. This class has been transformative for me in many ways, but the most enjoyable part is to become an artist that uses her body. I've been using computers to do everything since I was 9 or 10 years old. Discovering the way that I can draw with my entire arm, shoulder, body has nurtured a new love for art which I hadn't previously imagined. I admire Browns work for it's ambitious nature, conceptual framework and technical intelligence. I aspire to integrate interdisciplinary interests in this way and I enjoyed learning about her process.
Posted by Beatriz Wallace at 6:48 PM