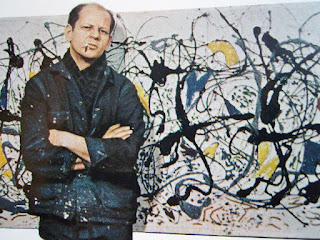 Jackson Pollock was not just an artist. He was also an inventor. His style of painting on the floor created a whole new style of art called abstract expressionism. Pollock believed that art had more to do with the process than the result of the image produced. Critics enjoyed his work because they felt that they could imagine how his paintings were made. They looked at his paintings and envisioned how the paint landed on the canvas; was it a big arm movement, a drip from a paint brush, or a spill from a bucket. Pollock’s work clearly and uniquely demonstrates physical expression in art. It is an interesting style that few people have had success imitating.

Pollock found inspiration in surrealism, and was interested in artists like Digo Rivera and Pablo Picasso. It was Picasso's work that showed him a new perspective of European art, which he previously felt was less valuable than American art. At this crucial time in the middle of the World War, Pollock had a great deal of emotions to express He worked to produce art that could simultaneously move people and allow him to express himself. One day, Pollock realized he did not need to chain his canvas to an easel like all other artists before him. He put his canvas on the floor and literally threw paint at it in as many different ways he could think of. 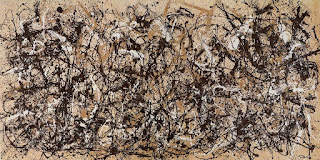 Though it may look like a series of scribbles and nonsense, these paintings are actually particularly famous for their randomness. It is very difficult to fill a canvas with paint without some sort of repeating pattern. But Pollock managed to create a board filled with noise, where there is no focal point and no single stroke or area stands out more than anything else. It is crazy, random, frustrated even. But at the same time, it is somehow also collected and structured. Some compare his work to the chaos and harmony of nature -- and certainly see that as representative of the war. Whether Pollock was painting nature, the war, his emotions, or absolutely nothing at all, his art made people feel because his process is so vivid. This is what he believed was important.


Pollock had strong beliefs that influenced many. He was known to sometimes record himself making art in unusual ways so that he could later see the process. He used everything as a paint brush, from rocks and sticks to even turkey basters to spill paint onto the canvas is different ways. Pollock is also quoted saying “look passively and try to receive what the painting has to offer and not bring a subject matter or preconceived idea of what they are to be looking for.”

Pollock died tragically at the young age of 44 from driving drunk, but not before he revolutionized American art forever. 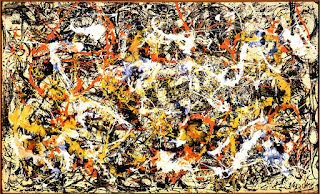