This summer, I was lucky enough to visit Paris with my Grandmother. One of the highlights of my trip was going to the Museé Marmottan Monet. Although I was in awe of Monet’s signature water lilies, my favorite work was Impression, Sunrise. Completed in 1872, the oil on canvas work beautifully captures colors and playful reflective light. The viewer’s eye is drawn primarily to the sun, which is a unique and warming color. The eye then moves down the reflection of the sun’s light on the water, to the darkest boat, and recedes back into the industrial mid-ground. 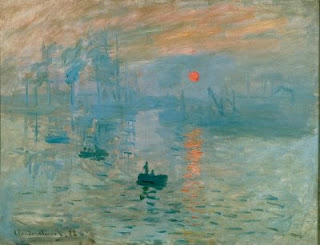 Monet’s impressive work with water can also be seen in his pastel work, Warterloo Bridge, London. The specific date of completion is unknown, but it is estimate to be finished in the late 19th century. In this work, I was specifically interested in Monet’s use of line. The water has a sense of dynamic movement due to organic and fluid lines. In contrast, geometric lines make up the structure of the bridge. The shades of blue used to depict the water and the bridge are the same, and only the form of the lines distinguishes between the two. 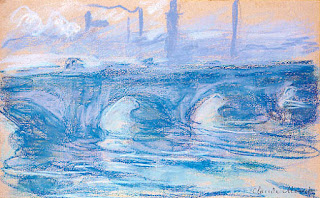 In the same year Impression, Sunrise was completed; Monet also did a pencil on paper sketch titled View of Ruen. The sketch includes the themes of water, boats and reflections similar to the two works previously mentioned.  The variation of line strength creates a distinction between the structural boats in the foreground, the organic trees and buildings in the mid-ground, and the light clouds and sky in the background. As a result, the work has a sense of depth and perspective. This sketch was later converted into a finalized oil painting. 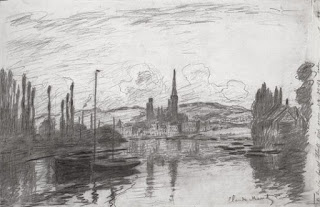 One of the other pencil on paper sketches that Monet did is titled Tree Trunks. It was one of his earlier works, done in 1857. Evidently, his affinity of nature started early, and continued all the way through the final stages of his life and career, as he spent most of his time working in his personal gardens in Giverny, France. I similarly have an affinity for nature, and have learned a great deal from Monet’s use of organic forms that I hope to apply to my own work. 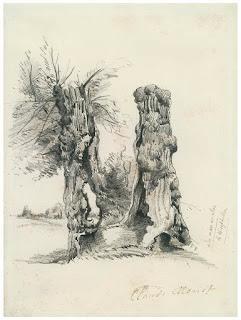