Reynolds, Gainsborough, Titian, Ingres. All describe European portrait painters of history and big names in the art world. When asked to think about art or chose an artist to study, many of the same images are the first to surface and dominate our understandings of what constitutes art. But what happens when the tradition of European portraiture is complicated and challenged? When someone engages the visual rhetoric of prestige and glorification in the form of the urban black male? When issues of race, power, and political representation are brought to the forefront of art-historical discourse?

Kehinde Wiley was born in 1977 in Los Angeles, California as a twin brother to an African-American mother and Nigerian father. He was raised in the absence of a father and it was his mother that supported his passion for art and enrolled him in classes. He earned his BFA from the San Francisco Art Institute in 1999 and his MFA from Yale University in 2001. However, while many aspects shape Wiley’s identity - and as a result, his art - much early criticism has failed to explore the wider implications of Wiley’s work.

From a young age, Wiley recognized that the history of western painting excluded people of African descent. A personal favorite of his is Kerry James Marshall’s grand barbershop painting in LACMA, which threw into sharp relief the absence of black images in the museum. He felt a certain fascination with being able to feel a relationship to the institution and the fact that people looked like him on some level. In incorporating the urban black-male figure into his current art, he questions the centuries-long exclusion of such figures, and affirms their presence in a society that has long discounted and undervalued them. 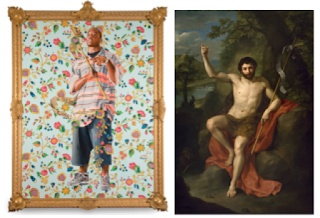 Kehinde Wiley first caught my attention with his piece St. John the Baptist II. On my first day working at the Nasher, I was walking through the Open This End collection of contemporary art when I came across Wiley’s piece. Larger than life and visually stimulating, it left standing in quiet awe as I felt the need to adequately understand and appreciate that which hung before me. Teeming with nuances and intricacies – both literal and figurative – I was drawn in by the ornate details of the flowers in the background and the juxtaposition they presented to the street clothes, cell phone, and watch. These elements also make statements about masculinity and materialism, respectively. The flowers can both serve to emasculate the figure, but also enhance his commanding presence. This piece helps to call attention to media stereotypes, and complicate the already existing understandings of a single African American stereotype.

Wiley incorporates Renaissance, Baroque, and Rococo elements in his works, with a focus on the importance of portraits that signify privilege and prestige. The combined depiction of street wear and haute couture, hyper-masculinity and effeminate postures, old and new, questions and assumptions comprise a multiplicity by which Wiley challenges the status quo. Irony lies in the sense that juxtapositions serve to highlight the very different natures of the two realms, while the interchange of elements across styles and time periods show that the two are more similar than many would like to think. There lies a common preoccupation with image and wealth, with the consumerism of hip-hop conflating with the opulence of the old master painting.  The desire to be recognized is also handled with an ironic touch as it is typical for Wiley’s models to remain anonymous his works to rater be named after the art source. In this sense, the male subject serves as more of a “type,” a representative of a group, than an individual identity. 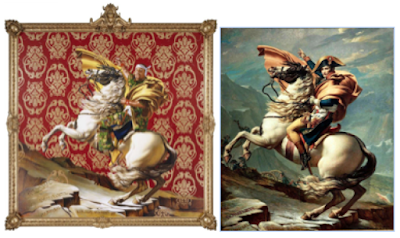 In Napoleon Leading the Army over the Alps, Wiley uses a familiar story from history to tell a lesser known one – one about contemporary black identity. Jacques-Louis David’s painting Napoleon Bonaparte Crossing the Alps at Great St. Bernard Pass is appropriated, with Napoleon boldly recast as a black warrior, donning camouflage fatigue. The patterned wallpaper background acts to draw visual focus to the subject, as well as amplify his air of self-possession. The neglect of black subjects in history now reassigns value to the sitter, suggesting the viewer invoke images of remarkable black leaders such as Toussaint L’Ouverture and Martin Luther King Jr. Wiley seeks to address the importance of seeing presentations of black subjects in contexts of power, beauty, and confidence, as well as the dangers of disregarding their absences from institutions. He has also quite deliberately strayed from overt identity politics, characteristic of African-American artists of the previous generation, while still posing questions, challenging society’s perceptions, and embracing the dichotomies present. 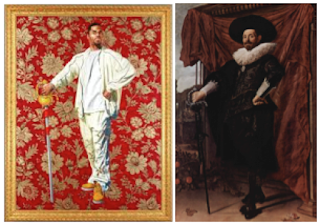 In this elaborate and sophisticated impersonation, a young man from Harlem, New York, stands in the place of Willem van Heythuysen, a wool merchant from Haarlem, Netherlands. With the overlap of the city name is also the replicated pose, where the subject of the painting stands exactly as that of Frans Hals’ paintings, sword and all. The exception to this impression lies in the clothes donned by the subject, replacing the attire of a member of the Calvinist bourgeoisie with that of a hip-hop lifestyle. The Sean John sportswear and Timberland boots provide a very different narrative, while the ornamental background amplifies the work’s artificiality by placing the figure in a non-space. Furthermore, the golden tendrils of the large flowers wrap around the figure’s legs, suggesting a presence that cannot be contained. Wiley’s painting sheds light on our age’s conflicted relationship to privilege, power, and the past through Hals’ portraits depicting the Golden Age of Holland.

“Painting is about the world that we live in. Black men live in the world. My choice is to include them. This is my way of saying yes to us.”
-Kehinde Wiley