Xu Beihong 徐悲鸿 (1895-1953), a painter and fine art educator in modern China, was famous for his work of figure, animals and plants. He praised highly of realism, and promoted the integration of western style skills into traditional Chinese painting. Xu Beihong put great emphasize on light, composition, and modeling. For figure painting, he was expert at depicting the precise skeleton structure and at enriching his work’s ideological content, which exerted significant influence on the china’s fine art industry at that time.

Born in poverty, Xu Beihong learned classic Chinese works and calligraphy from his father who was a teacher good at poem and painting. The hard life enriched Xu Beihong’s social experiences and broadened his art view. Thanks to his outstanding performance in art, Xu Beihong was then funded to study abroad in Japan, France and German, thus able to incorporate the essence of both eastern and western painting into his own style. At the end of his trip in Europe, he also visited Belgium, Italy and Swiss, and was deeply inspired by the famous European artists. 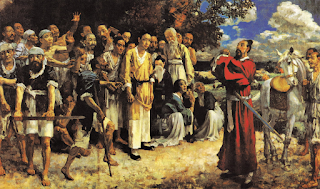 At the age of 32, Xu Beihong went back to China and started his fine art education career. His work of oil painting and Chinese ink was highly appreciated at that time, due to his perfect integration of Chinese brush and ink techniques with Western perspective and methods of composition. Lots of his most famous work reflected the changing society of China. 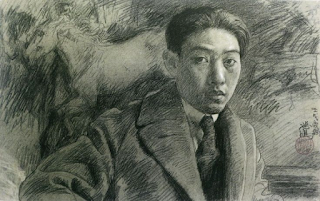 The Self Portrait (1922) has a full composition, with a loosely rendered white horse in the background, which reflected Chinese freehand ink brush painting. Xu Beihong arranged light and shade by utilizing active western crosshatching. The sharp details and highlighted areas of selectively aplite white chalk well depicted his facial features. From my point of view, this self-portrait is very realistic although with bold sketching, since his eye sight seemed to direct at the viewer. 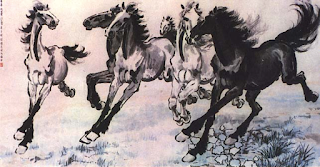 The Six Galloping Horses (1942) is one of Xu Beihong’s most famous works. In this large Chinese brush painting of six galloping horses, the artist’s expertise and incredible imagination were illustrated by the creative compositional arrangement and the control of ink.