As fervent lover of Chinese traditional paintings, I find Qi Baishi’s work my primary source of inspiration. Sometimes his brushstrokes are free and expressive, but other times his brushstrokes can also be clean and exquisite. No matter what style he adopts in a particular painting, he was always able to convey the sheer authenticity of the object or the person he portrays. As I was beginning to learn Chinese Traditional paintings, observing and imitating his works has provided me with invaluable instructive experiences towards develop not only my skills to paint, but also a pair of observant eyes.

Qi Baishi 齐白石 (1864-1957), had many renowned nicknames such as “Old Man Baishi” (“Bai-shi Lao Ren 白石老人), and “Rich Man for Three Hundred Stone Seals” (San Bai Shi Yin Fu Wong三百石印富翁) (Bao, Mu, and Lane 27). He is regarded as the most representation artist of Chinese traditional paintings of the Twentieth Century. Born into a poor peasant family in Xiangtan, Hunan Province, Qi Baishi became fascinated with painting when he read the book The Mustard Seed Garden Manual of Painting which discusses Chinese paintings of the 18th century. He started learning to paint by following step-by-step instructions on the book, and with the referral of a family friend, Qi Baishi became a student of Xiao Chuanxin 萧传新, a renowned local painter. He then followed the instruction of both Hu Qinyuan 胡沁园, a flower-bird painter, and Chen Shaofan 陈绍蕃, who taught him Chinese Literature as well as “Fine-linear Drawing Style” (Gong-bi Style工笔画), a style that creates delicate details on paintings (Bao, Mu, and Lane 28).  Later, Qi Baishi studied history, poetry, calligraphy, and seal-carving, a wide range of artistry by himself. At the same time, he retained his enthusiasm to observe the nature and the everyday objects around him, a habit he developed from his childhood in the rural village. At the age of 40, he traveled intermittently for eight years across China, an experience that “not only enriched his knowledge and interest in the beauty of nature, but also helped him to develop his skills of painting (Bao, Mu, and Lane 29.” It was then he became well-known throughout the country. Later in 1917, when war started in China and greatly traumatized his hometown, he had to move to Beijing and readjust to a new life there (Bao, Mu, and Lane 29).  He taught students as a professor at the Beijing Academy of Fine Arts and his admirers held exhibitions of his works in and beyond China. By 1953, he was recognized as the First National Artist of China by the new Communist government (Bao, Mu, and Lane 30). 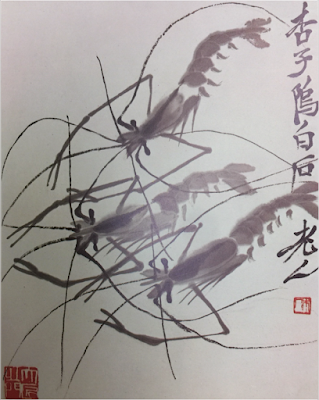 Ever since his childhood as a country boy, he was interested to observe living things in the rural countryside. As a painter later in life, he still painted those natural things.  Shrimp is his favorite object to paint. In one of his shrimp paintings, he wrote:

Fifty years ago I was a little child
Using a ball of cotton as bait I fished for shrimps.
Today I painted this one, my hair has turned all white –
The color of cat-tail blossoms which I used to see.
(Bao, Mu, and Lane 31)

While Qi Baishi intended to depict the reality of the nature, he did not do so through mechanic realism by which he copies every detail of the object. Rather, he tried to capture the spirit of the natural object (Bao, Mu, and Lane 31).  His style also changed throughout decades of experience. In the beginning, his depictions were somewhat realistic, later, they were exactly realistic, and at the end, he brought in the contrast of dark and light ink to capture the essence of the moving object (Bao, Mu, and Lane 32). To learn from the nature, he brought small living shrimps and put them into a water bowl on his own desk and observed them every day. He painted eight legs rather the real ten legs of shrimps, because to him, eight legs would better illustrate the freeness of the shrimp form as a living being with its own spirit.

Besides shrimps, he also painted other living creatures like fish, crabs, frogs, bees, beetles, dragon flies, praying mantises, crickets, flies, and even mosquitoes (Bao, Mu, and Lane 31).  More than that, he also observed and depicted birds, rooster, ducks, and flowers, grass, and fruits. For him, every ordinary object we see every day is a work of art. In depicting chickens, he used only simple brushstrokes and black ink, yet each chicken looks fluffy and cute like they are in real life. In the larger painting of the flowers, he combined the detailed style of brushstrokes to illustrate the butterfly and the cricket, with a relatively more expressive one to depict the flowers and the leaves. His flexible depiction of these creature made them come to life on the plain painting paper. 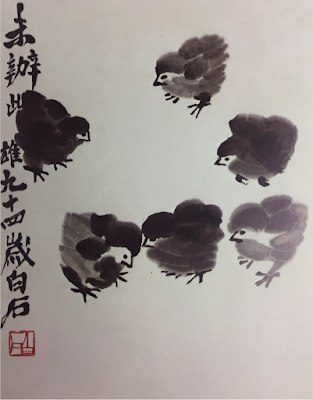 Details of his depictions of insects: 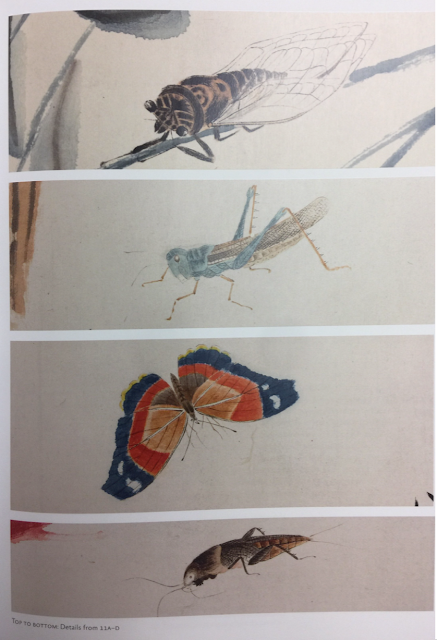 However, when he depicts some natural object such as lotus flower and leaves, he did not strictly stick to the detailed techniques of the “Fine-linear Drawing Style” (Gong-bi Style工笔画). Instead, he used expressive and bold brushstroke, and a gradient of color differences to, once again, make the object come to life.