As I was flipping through various art books at Lilly Library, I wanted to discover an artist I had not heard of before. The bright colors and unusual use of line immediately drew me to Josef Albers’ work, since I love creating graffiti lettering and designs. When I looked through a book with Albers’ art, I was surprised to see very realistic drawings alongside abstract compositions. I was intrigued by the intricate drawings and sketches, which contrasted his simplistic, linear work.

Josef Albers was a German-born American artist who primarily created colorful abstract work. Born in 1888 in Bottrop, Germany, Albers studied painting and printmaking when he was young. In 1920, he enrolled in Bahaus (a prestigious German design school) and created “compositions made of colored glass, as well as examples of furniture design, metalwork, and typography” (Brittanica). Albers went on to become a master at Bahaus and began teaching art classes. When the Nazis shut down Bahaus in 1933, Albers immigrated to the US. Albers played a key role in setting up the fine arts program at Black Mountain College in North Carolina, and worked there until 1950. With his wife Anni, he “developed a curriculum that revolutionized art education” (Waldman 12). He then took up a chairman position of the Department of Design at Yale University, where he worked until his death in 1965. His work was featured in a solo exhibition at the Metropolitan Museum of Art in 1971.

Albers is best known for his contributions to of Color Field painting and Op Art, as well as his use of complex geometric patterns. Albers wanted his students to have an awareness of what they were seeing instead of teaching rules and specific techniques. His approach focused on “observation and self discovery”, as he noticed the little details and visual relationships in everyday life. (Horowitz). His most famous work is the series of paintings Homage to the Square. 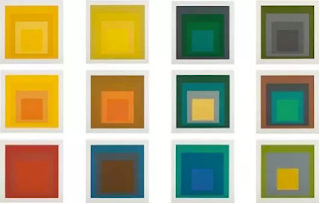 Homage to the Square is an exploration of chromatic interactions. This is the artwork that first caught my eye in the book. I have noticed this type of geometric design in so many places, from jewelry to fabric to architecture. For this piece, Albers created hundreds of small paintings and prints using oil paint in various colors. He always carefully listed the exact colors used in each composition. According to Albers, he “studied and experimented and compared” the colors until he felt they were right (Weber 47). The image above shows a compilation of a few of his squares. Though every square has the same composition, the differing colors and values give each square a unique appearance. It is amazing how the use of dark and light colors can completely change the way a viewer sees a piece. 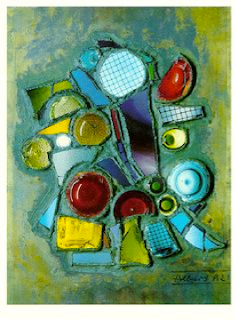 My interest in Albers’ use of color then led me to the piece Glass Assemblage Mounted on Brass Sheet. As someone who loves doodling and creating abstract designs, this work truly stood out to me. When working with glass, Albers sees “colors as direct light”(Weber 34). The piece has a very whimsical feel, as broken parts came together to create a whole. Albers says he often visited the junkyard to find pieces of glass, since inflation in Weimar Germany made most things unaffordable. The unwanted shards of glass united to create a unique composition, and I really like the different textures and patterns on the pieces. The use of colors brings the artwork together, and the contrasting warm colors make the composition pop. 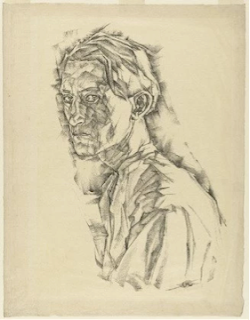 It is very interesting to contrast the colorful, bright images above with the one here. This piece is titled Self Portrait III, and it is definitely different from the Albers’ other pieces. I wanted to include a drawing by Albers, not just because this is for a drawing class, but also since it shows another side of the artist. This piece was created using lithographic crayon, and Albers has used the side of the crayon to create texture and shading. This technique was fascinating to me, since I normally wouldn’t consider using a crayon this way. This method gives the drawing a linear, geometric appearance; this characteristic is echoed throughout his other works as well. It is evident that drawing was important to Albers, as it allowed him to develop his style and methods for his larger works.