Pablo Picasso was born in Spain in 1881, and died in 1973 in France. He was one of the most influential artists of the 20th century, with works ranging from paintings, printmaking, ceramics, sculptures, and stage design. He was also the co-founder of the art style Cubism. Historians break up Picasso’s works into distinct periods during which Picasso focused on certain themes
.
His first period was known as the “Blue Period” from 1901 to 1904. He painted scenes that expressed poverty and anguish, using shades of blue or green. He was depressed over the death of one his best friends Carlos Casagemas, and his paintings expressed his depression. Below is the oil painting known as “The Blind Man’s Meal” painted in 1903, and is one of my favorite paintings by Picasso. It is one of my favorites because the man appears to have no eyes, and his sockets are filled with shades of blue. The complementary color orange appears in the vase that the blind man is touching, which emphasizes the area. The highlights on his face are also striking. 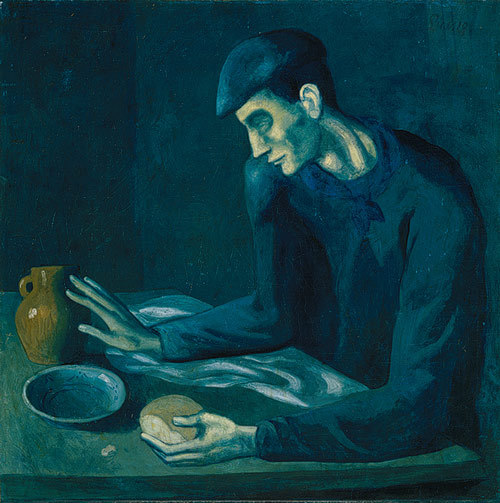 Between 1905 to 1906, Picasso overcame his depression and entered the “Rose Period” during which he was in love with Fernande Olivier. He used warmer colors in his paintings, reflecting his love. In 1907, Picasso founded Cubism with “Les Demoiselles d’Avignon,” which is shown below. Cubism involves breaking objects into geometric shapes and arranging them in an abstract way. The five nude prostitutes from a brothel are broken into shapes on an almost two-dimensional plane. The women seem almost menacing, with one appearing to wear a mask.

Between 1918 and 1927 was Picasso’s “Classical Period” during which he moved away from Cubism and focused back onto Realism. After 1927, Picasso returned to abstract works and focused on Surrealism. In this period Picasso painted one of my favorite paintings of all time “Girl Before a Mirror.” Painted in 1932, the girl is Picasso’s mistress Marie-Therese Walter. The colors are rich in the painting, and the use of line patterns and shapes breaks up the woman’s body in a surreal way.
The painting is said to carry themes of sexuality and vanity.

I love Picasso’s work because his paintings are diverse. Some depict realism, some surrealism, yet all are interesting in color and technique. His paintings are truly unique.


https://en.wikipedia.org/wiki/Les_Demoiselles_d%27Avignon
Posted by Unknown at 10:57 AM