M.C. Escher was a Dutch graphic artist. He created mathematical drawings that were incredibly angular and detailed. His work became very popular among mathematicians, scientists, and even in pop culture. I was first introduced to M.C. Escher in middle school and I was immediately drawn towards his work. Escher was an artist who strictly did sketches, with pencil. Often times, his sketches messed with your mind because he drew things that could not actually exist, logically at least, and that’s what made him so interesting to me. 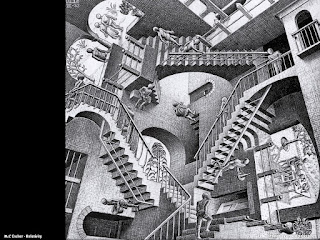 This drawing is titled “Relativity.” This is why I love M.C. Escher. You really can look at this all day and continue to find new things that you didn’t notice before. Basically it depicts a world where gravity is not a factor, or perhaps it is but there are infinite gravity levels in different areas. 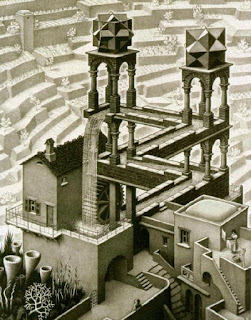 This is another one of my favorites. Many of Escher’s drawings remind me of the movie Inception, and this one is very similar to the Penrose stairs. It doesn’t make any sense because if you look at the waterfall its clearly going downwards, and yet, where it lands is the same level as where it leaves. You just can’t stop looking at it.
Posted by Unknown at 7:07 AM