I strolled out of Smith Warehouse Bay 12 at 12:33 this afternoon with the infuriating feeling of dry paper and charcoal still lingering on my hands. Up through the graffiti-ed tunnel and into Lilly Library I was greeted immediately by the exact person I was looking for: that warm smiled older man who wore cowboy boots and glasses with translucent frames, the one who talked to us earlier. As I named dropped my professor his warm smile grew even larger and he walked me down stairs. When we got to the right part of the stacks he wished me well and suddenly I was deserted in a cell of hard bound books. As my eyes scanned each shelf, I did what every teacher has told me not to do since I was a kindergartner. I judged each book by its cover. The skylines of thick, vinyl books with iron branded Gold Lettering “ITALIAN RENISSANCE ART” made me shudder—after my relaxing two and half hours with Bill Fick I was in no state to pick up what I equated to a Merriam Webster. With more scanning I finally caught a glimpse of a thin, orange book with a red ribbon dangling by its side. I pulled it out. “Hey! Rembrandt I’ve heard of him!” I thought to myself. While I had heard of Rembrandt, be it from toothpaste ads or for his famous paintings, I really had no association with his name and his work. I was prepared to open that tiny little orange book and see abstract surrealism. Luckily, still in my serene, Smith Warehouse induced state, I was presented with beautiful sketches of naked women. “What more could I ask for!?” I thought to my self again. I pulled out three more book of Rembrandt and flipped through them. Curved lines, and bodies, and cross hatches, and facial expressions—I was enthralled by the lack of random Styrofoam shapes and staplers—some things I now associate with any blank piece of paper and pencil. Drawing was something I have always done informally, whether it be in a journal or on the sides of my homework I draw almost everyday, but it was always people. Always faces. Always bodies. My work, while no where near the level of Rembrandt has gotten passing praise by anyone who sees it. But I wish it was better. I chose Rembrandt because I was hoping he could teach me.

Coincidentally, Rembrandt was known for being an incredible teacher—he has a notable and prolific list of students. But every teacher must be taught, and Rembrandt was deeply influenced by “Northern artisits who had lived in Italy, like Lastman, the Utrecht painter, Gerrit van Honthorst (Rembrandt’s main link to Caravaggio), Anthony van Dyck, and—mostly through prints—Adam Elsheimer and Peter Paul Rubens.” (metmuseum.org) From his intense education surveying other artists and his dedication to studying people “from life”, Rembrandt is easily marked as the greatest artist of Holland’s Golden Age (17th Century). He is known for his direct observation and his ability to capture descriptions of “light, space, atmosphere, modeling, texture, and human situations.” With these skills he became a prominent portraitist in Amsterdam.  His success started soon after gaining celebrity from his portraits. In the 1630s he started his teaching and started his own art collection. His success as a painter translated into his drawings. He became known equally as good as a draftsman as a painter.

I sat for a while admiring Rembrandt’s work, from his final pieces to his doodles (for lack of a better word). I loved them all. I loved seeing every step of the process, seeing the movement of his hand, and the effortlessness to each piece. Rembrandt has such a knack for capturing emotion, he is a story teller through his art. I particularly liked his telling of biblical stories. 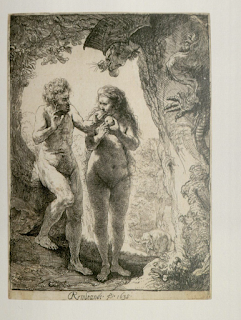 This is a prime example of Rembrandt's success of story telling and his ability to capture pure human emotion. Temptation is so apparent in eve's expression and there is such heed and confusion in Adam. I am particularly drawn to Rembrandt's shading technique. He uses widely spaced hatchings. I like how the hatching creates both texture and depth to the picture. 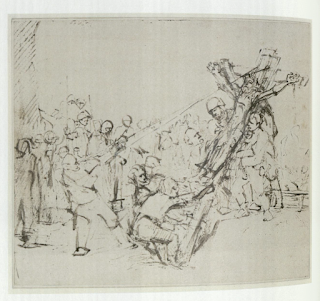 This is an untiled Sketch of Rembrandt's that I really enjoyed. It looked so fast and so effortless. His Baroque style, even in a study, is apparent. I am in awe of how his free hand is able to still capture such emotion. They still tell the story. There is so much commotion and the franticness of this scene is palpable. I chose to expand on this random sketch because after some research I found out that one of Rembrandt's most famous pieces is "Three Crosses" a depiction of the crucified jesus and the other criminals. It is interesting how influenced Rembrandt was by religion and his fascination with the crucifixion, as there were many other sketches like the one above. 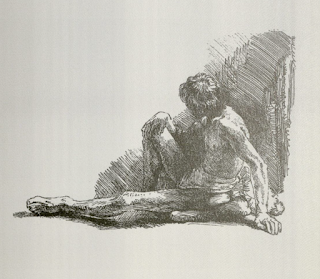 This is another untitled sketch by Rembrandt. While I know his more finished pieces are what gave Rembrandt his fame, I am drawn to his less notable work. I love how this piece just sits in the corner. I love his shading technique and his use of line and light. Rembrandt really captures the human spirit and creates such drama with his shading and depth. 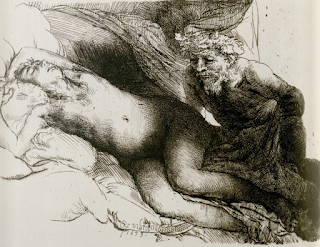 Without knowing the story I was so able to pick up on the drama of this picture. There is such a sense of curiosity from the male character and suffering from the female. After I learned the story I was able to appreciate Rembrandt's use of shading and light to highlight the evil from the Jupiter as a Satyr and the innocence of Antiope. I continue to love Rembrandt's technique using the cross hatches and his ability to convey texture.

Rembrandt: Drawings from the Berlin Kupferstichkabinett by Holm Bevers Published by Hatje Cantz