Joseph Mallord William Turner was born in April 1775 in Covent Garden, London, England.  Turner faced several tragedies throughout his life, including the death of his younger sister in 1796 and the death of his mother in 1804 (Andrew).  Possibly due to the stress brought upon the Turner family from these deaths, Turner lived with his uncle at Brentford, Middox, as well as with other relatives at Margate, Kent, at various points in his life.  Turner attended the Royal Academy starting in 1789, when he was about 14.  While there, he produced many works of art, working mainly with watercolors and pencils and focusing on landscapes and architecture.  At the Royal Academy, Turner’s art style was molded by the artwork of both Richard Wilson and John Robert Cozen, but Turner managed to use his own unique, slightly unconventional, techniques (Andrew).
Early in his artistic career, Turner worked primarily in grays, blacks, and whites, and focused on nature in his paintings.  His works appeared to be more studious than creative.  However, Turner later transitioned to using colors in his works.  He also added imaginative and creative elements, as seen in several of the dramatic scenes that he painted, as compared to the calm landscapes that he had painted early in his life (American Art-Union).
Turner used very unique techniques in order to produce his works.  Turner is known for starting his works with dark colors, and thereafter working to remove those dark colors in order to build up the light that he needed.  In other words, Turner would wipe, scratch, and cut the paint off the paper in order to create light as opposed to adding paint to create darkness and shadows.  Another unique strategy implemented by Turner was brushing water over the painting where light was needed of the painting in order to lift the dark colors off of the paper.  Additionally, Turner often combined fine brush strokes and pencil markings with broad washes, two seemingly contradictory techniques, in order to give his work more depth and volume.  Furthermore, Turner used friction and his fingers while working with watercolors which enabled him to add texture to his works..  Turner used these unconventional techniques in order to produce very realistic and dramatic landscape paintings (Wilton).
One of Turner’s works that demonstrates his use of light and his focus on landscapes is his watercolor painting from 1825 entitled Val D’Aosta, shown below.  This painting is a very realistic depiction of a landscape of water and mountains in the background, combining two of Turner’s most painted landscapes.  The sky in this painting demonstrates Turner’s use of light as you can actually see some scratch marks in the clouds where Turner most likely wiped away the dark colors in order to create the light that is seen now.  At the bottom of this work, there are 3 people shown working and washing clothes.  Although the people in this painting, as in many of Turner’s paintings, are small and not the center of attention, they play a vital role in the overall atmosphere portrayed by the work.  These people, for example, appear to be washing clothes in the water, demonstrating the reality of the hard work of daily life.  Although there is not much drama depicted in this painting, I find it to be an amazing and powerful work of art due to the great detail placed in all aspects of the painting.  The tremendous detail is found in the main focus of the painting, such as the trees, bridge, and castle, as well as in the small people in the foreground and the distant mountains and buildings in the background (Wilton). 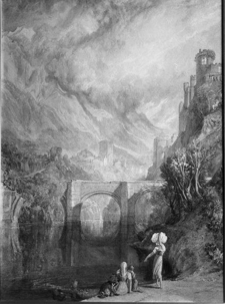 Turner’s work shown below, entitled The Storm, was painted in 1823 using watercolors.  This work is one of my favorite paintings created by Turner due to its emotional and dramatic depiction of the scene.  In the painting, there is a shipwreck in a storm at sea.  Here, one can see how Turner scraped and wiped away the dark colors in order to create the light that captures the power and violence of the sea so well.
Furthermore, The Storm is another example of how Turner paints people in in his landscapes, but he does not make them the focus of the work.  In The Storm, one can tell that the people on the ship are panicking and attempting to save the ship, as well as save the people who fell into the sea, adding more drama and action to the scene.  Although physically small in the painting, Turner pays great attention to the people in his works, and therefore, the people that he paints greatly contribute to the overall mood and message of each painting. 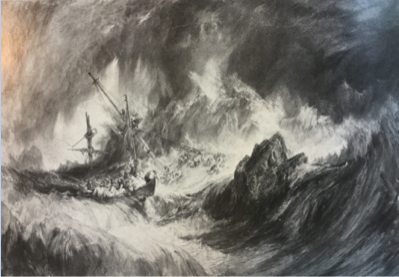 Although Turner worked with a lot of grays, blacks, and whites, he did occasionally use color in his paintings.  One such work of art, painted in 1815, is show below and is entitled The Battle of Fort Rock: Val D’Auste, Piedmont, 1796.  In this painting, Turner once again portrays a mountainous landscape.  However, unlike in Val D’Aosta, this painting does not portray a serene mountain landscape.  Rather, this painting shows the destruction and devastation that came with The Battle of Fort Rock.  This is seen in the fallen trees and the person tending to the apparently injured individual at the bottom of the painting.  Once again, Turner managed to use people to support and enhance the dramatic ambiance that he intended to portray in his work.  Additionally, Turner’s great attention to detail in the trees and foreground of this work further contributes to the beauty and compelling nature of this painting. 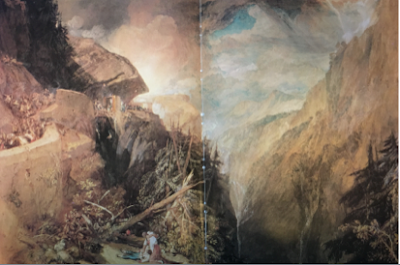 I greatly admire Turner not only for his talent in creating beautiful works of art, but also because of his ability to create detailed realistic scenes that evoke various emotions in his audience.  It takes tremendous talent to be able to demonstrate the chaos and drama that is reflected in Turner’s paintings.  Furthermore, I have always been more intrigued and impressed by realistic artwork as compared to abstract art, and I admire Turner’s ability to create extremely realistic scenes using watercolor as his medium.  Finally, I often use unconventional techniques in my artwork, such as using my fingers not only to blend pencil marks, but also to add shading from the leftover graphite on my fingers.  Accordingly, I appreciate and admire Turner’s development and use of his many unconventional techniques, such as scraping away darkness to create light and submerging finished works in water in order to create a softness throughout them. I focused on several of Turner’s more realistic works of art in this analysis because of my personal interest in and appreciation of more realistic works of art.  However, Turner also created works that tended to be more abstract in character, such as his Sunset Over the Sea with a Crescent Moon, and Petworth: In the Chapel.  Turner’s multitude of captivating works and his many different styles and techniques, along with the expertise with which he created dramatic landscapes that evoke a range of emotions, are among the many reasons that Turner’s works are still admired by many today (Wilton).