Born in 1501, Mi Fu was an artist in the Northern Song Dynasty. He was listed as one of the "four great calligraphers in Song Dynasty". The other three in the list being Su Shi, Huang Tingjian, and Cai Xiang. I put family names in front of given names in accordance with Chinese convention. Like most Chinese intellectuals of the day, Mi Fu served in the imperial Song government. However, unlike most of his contemporaries, he did not go through the Imperial Examination (Keju), through which most government officials were selected. Shen Zong, the emperor in Mi Fu's time, appointed him to a secretary because Mi Fu's mother was Shen Zong's wet nurse. Below is a portrait of Mi Fu. 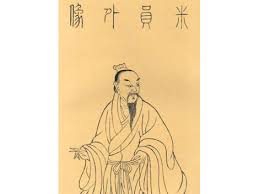 Mi Fu had no interest in higher positions in the government and devoted himself fully to the pursuit of art. His style underwent several profound changes and did not completely develop until he was in his fifties. As a child prodigy, Mi Fu displayed a remarkable talent in memorizing and imitating the works of the ancient masters. At first, Mi Fu studied the style of many Tang masters, including Yan Zhenqing, Ouyang Xun and Chu Suiliang. At the age of 31, Mi Fu followed the advice by Su Shi, who was 14 years his elder, to learn from the masters in the Jin Dynasty. Before Mi Fu formed his own calligraphic style, he was often criticized for being too imitative of the ancient masters.His works were even ridiculed as "montages of characters of existent masterpieces".

I was drawn to his calligraphy the first time I encountered "Shusu Scroll". "Shusu" was the name of the kind of silk on which Mi Fu recorded eight poems of his own, and hence the name of the piece. He was already in his fifties when creating this masterpiece, and it faithfully reflected his personal style. Just as musicians would , masters of the cursive style often intentionally create tension and resolve it . However, Mi Fu went to extremes in doing so and hence imbued his work with dynamism and power. I selected two characters from the scroll as examples. 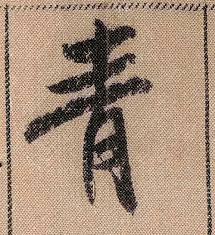 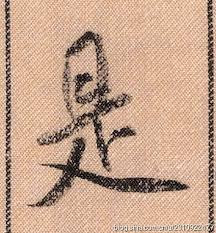 Some may find his style slightly protruding. Yet others, including me, find it exciting. Silk of the type used in the Shusu scroll is very difficult to write on as it does not readily absorb ink. Few calligraphers dare to write on it, but Mi Fu did. This very quality of the silk gave his calligraphy work even more power by making the contrast between the heavier and lighter strokes more vibrant, the rhythm of his writing more apparent, and his attention to detail more awe-inspiring. Calligrapher Dong Qichang commented that Mi Fu wrote like “a lion fighting against an elephant with all his might” on this scroll.

According to Stanley-Baker, "Calligraphy is sheer life experienced through energy in motion that is registered as traces on silk or paper, with time and rhythm in shifting space its main ingredients." Through imitating a master’s work, I believe, one can feel the mental state of the master. After I came to Duke, I rarely have had the chance to practice calligraphy. However, whenever I get a chance to do so, I imitate Mi Fu’s work. Mi Fu’s burst of impulses can often penetrate through the paper and reach my heart. Below is my imitation of one of the poems in Shusu Scroll. 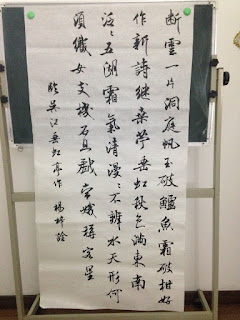