A BLOG ABOUT PENDLETON WARD

Pendleton Ward, from here on out referred to as Pen, is the creator of Cartoon Network’s Adventure Time. Pen created the show but it has grown to the point where he is more of an overseer of the show. However, his style is still used very clearly in the show. So in this blog post, I’m going to try and just focus on Pen’s work and style but it might spill into Adventure Time’s style as a whole. 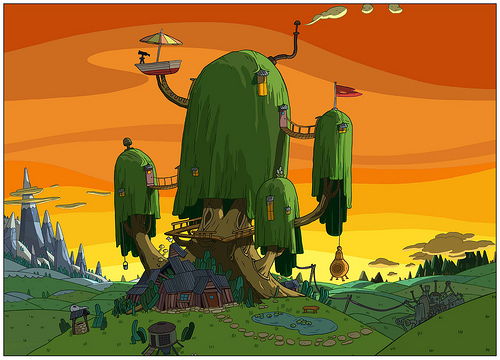 When most people watch the show they either make some blanket statement about the demise of Cartoon Network from when they were kids or how you have to be on drugs to understand this show. Well, as a fan of the show, I have problems with both of these statements. 1: To say that a children’s network has gotten worse since you stopped being a child is like saying Weird Al’s best album came out when you were 12. Yeah, you may have liked it more when you were 12 but that’s because he was making it for you then, not you now. And to the second point, I haven’t done drugs of any kind and I think it’s at times absurd, but never full-blown nonsense.

However, among people who like the show, they often praise the visuals. The show takes place in Ooo, a post apocalyptic land that ranges from vibrant pastels in the Candy Kingdom to dark and spooky in other areas. Even with the impressive range of colors and characters, I still think the physical style of the show is my favorite part. The movement of the characters is always so organic and unique. Jake, a dog with super stretching abilities will sometimes uses his powers to fight evil or sometimes he’ll just stretch up stairs because he’s being lazy. Finn’s resting face consists of two dots for eyes and line but his facial expressions are as varied as any character every conceived. 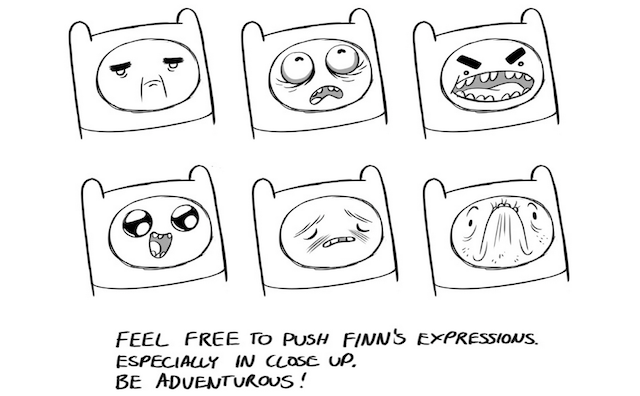 Pen Ward’s (yes, I know i’d call him Pen but I don’t actually know him well enough just to use a first name) drawing style is has been described as “inventive” but thats only a modest description. Here’s a link to one of his video’s that he put on YouTube before Adventure Time existed. It’s essentially a bunch of different characters just moving around but each character is so unique and so simple that it’s kind of amazing to me that this is even considered a style. When I say that I mean that his style is both very simple, mostly dot eyes and single line mouths but I’ve never seen any other characters that look like this.

The simplicity and originality are what make Pen’s style so unique and intriguing. Here are some more images that show some of his little quirks that define his style.