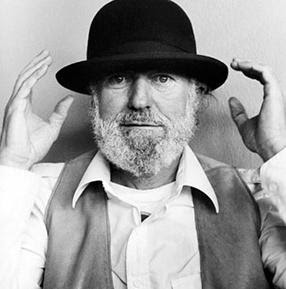 Lawrence Ferlinghetti is an American poet and artist (b. 1919) best known as a key force in bringing about the Beat movement in literature, especially in the San Francisco area. Ferlinghetti himself, however, does not use the term “Beat” to describe his work, instead preferring the term “wide-open”; Ferlinghetti says the term could be interpreted as referring to “the wide-ranging content of my poetry, or, in a different mode, to the poetry of the Beats…”

Ferlinghetti was born to Italian immigrants in Bronxville, New York on March 24, 1919 . He spent various parts of his childhood in an orphanage in New York, France, and living in the mansion of the wealthy Bisland family in Bronxville, New York. He eventually graduated from UNC with a BA in Journalism in 1941, and later from Columbia University with a graduate degree in journalism. In 1948, while studying at the Sorbonne in Paris, Ferlinghetti began to paint. Early in his career, he drew inspiration from abstract expressionist works.

In 1953, Ferlinghetti founded City Lights Bookshop (the first all-paperbound bookshop/publisher) in the country. He himself has published dozens of volumes of poems, and his 1968 A Coney Island of the Mind is still the most popular poetry book in the country.

Some recurring themes in Ferlinghetti’s work include the beauty of nature, common human life and the everyday tragedies and comedies, individuals in the face of the mass of society, and issues with the democratic system and fulfillment/failure of the American Dream. I enjoy Ferlinghetti because his poetic voice and artistic style is honest without losing its expressive. qualities. He uses words, rhythm, and line breaks in his poems and color, line, and composition (among others) in his art in ways that never seem contrived or polished, but rather make his work more “wide open” or accessible to the reader/viewer. I always feel as if he is speaking to me alone, whether in the form of a sketch or a poem.

The works I include here come from the book Ferlinghetti, Lawrence. Life Studies, Life Stories: 80 Works On Paper. In the foreword of the book, Ferlinghetti says, “As a painter, I have always been more interested in the life stories of the models than in their physical appearance, and these drawings are all attempts to ‘scratch the surface’ of the human façade.” 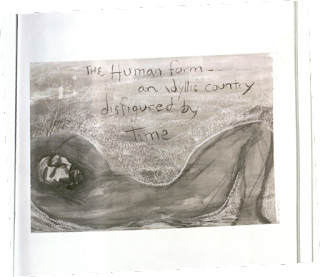 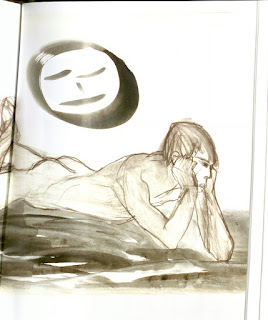 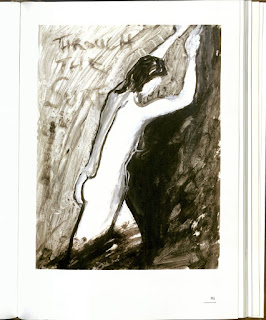 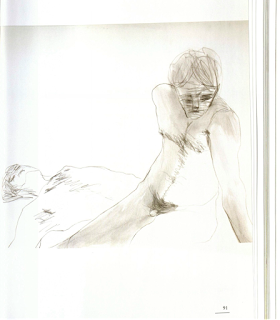 I appreciate how much Ferlinghetti manages to express here despite his minimalist approach and simple lines.

Underwear
I didn’t get much sleep last night
thinking about underwear
Have you ever stopped to consider
underwear in the abstract
When you really dig into it
some shocking problems are raised
Underwear is something
we all have to deal with
Everyone wears
some kind of underwear
The Pope wears underwear I hope
The Governor of Louisiana
wears underwear
I saw him on TV
He must have had tight underwear
He squirmed a lot
Underwear can really get you in a bind
You have seen the underwear ads
for men and women
so alike but so different
Women’s underwear holds things up
Men’s underwear holds things down
Underwear is one thing
men and women have in common
Underwear is all we have between us
You have seen the three-color pictures
with crotches encircled
to show the areas of extra strength
and three-way stretch
promising full freedom of action
Don’t be deceived
It’s all based on the two-party system
which doesn’t allow much freedom of choice
the way things are set up
America in its Underwear
struggles thru the night
Underwear controls everything in the end
Take foundation garments for instance
They are really fascist forms
of underground government
making people believe
something but the truth
telling you what you can or can’t do
Did you ever try to get around a girdle
Perhaps Non-Violent Action
is the only answer
Did Gandhi wear a girdle?
Did Lady Macbeth wear a girdle?
Was that why Macbeth murdered sleep?
And that spot she was always rubbing—
Was it really in her underwear?
Modern anglosaxon ladies
must have huge guilt complexes
always washing and washing and washing
Out damned spot
Underwear with spots very suspicious
Underwear with bulges very shocking
Underwear on clothesline a great flag of freedom
Someone has escaped his Underwear
May be naked somewhere
Help!
But don’t worry
Everybody’s still hung up in it
There won’t be no real revolution
And poetry still the underwear of the soul
And underwear still covering
a multitude of faults
in the geological sense—
strange sedimentary stones, inscrutable cracks!
If I were you I’d keep aside
an oversize pair of winter underwear
Do not go naked into that good night
And in the meantime
keep calm and warm and dry
No use stirring ourselves up prematurely
‘over Nothing’
Move forward with dignity
hand in vest
Don’t get emotional
And death shall have no dominion
There’s plenty of time my darling
Are we not still young and easy
Don’t shout

Posted by Lauren Forman at 8:24 PM