Most people know Dr. Seuss as a children's book writer, but they forget that he also illustrated his books and worked as a political cartoonist for many years. Theodor Geisel was born in Springfield, Massachusetts in 1904. His parents, Theodor and Henrietta, were German immigrants. As a child, Geisel doodled constantly even though he never had very much formal art training. Dr. Seuss uses inspiration from his hometown very often in his books. For example, his first book, And To Think I Saw It On Mulberry Street, took its name and setting from Springfield.
After high school, Seuss went to Dartmouth College and wrote for a humor magazine there. Because of his father's wishes, he continued on to Oxford for graduate school, but never completed his degree. He did meet his first wife there, though, and they were married in 1927.
Dr. Seuss returned to the U.S. after Oxford and began working as a political cartoonist during World War II. He worked for many publications doing cartoons and advertisements, but the main magazine he worked for was PM. In just two years, he wrote over 400 cartoons. His political cartoons mainly focused on the war and were critical of Hitler and Mussolini. He also criticized the isolationist movement and Americans who were not supportive of the war. Dr. Seuss's children's books also held political statements, though not as obvious as the cartoons. Examples include Yertle the Turtle as a depiction of Hitler and The Sneeches as a statement on racial equality. Through his drawing, Seuss was able to make statements about many political issues during and around the time of the war.
Dr. Seuss also illustrated his children's books, which he is most famous for. His drawings are very loose and curved; he uses almost no straight lines in any of his drawings, even buildings. He is also very unrealistic as he creates new animals, machines, and buildings. During the cartoon period, Dr. Seuss used mainly pencils and shading. When he started writing children's books, he used pen and ink more often.
I chose Dr. Seuss because he surprises his audience with his work. After seeing his children's books, many people would not expect that he also wrote clever and powerful political cartoons. His drawings are fairly simple, but his imagination allows him to create very unique and bold images. The first picture shown below is one of his political cartoons, drawn with pencil. This cartoon shows Seuss's anti-isolationist feelings and criticisms. American isolationist figured that Hitler would not get to America if they did not enter the war, so they were willing to just sit back and stay out of the picture, even though Hitler was attacking many European countries. The second picture below is the book cover for Yertle the Turtle and Other Stories. The picture shows Yertle the Turtle standing on the other turtle's backs in order to reach the moon. This is symbolic of Hitler using other countries for his own advantage, regardless of how it hurt them. Yertle the Turtle is a good example of how Dr. Seuss's political ideas reached his children's books, even though they didn't have to be political statements. The third picture is from Dr. Seuss's book You're Only Old Once! This picture shows the imagination of Dr. Seuss as he turns an ordinary stretcher into a curvy and interesting machine. This is also an example of the pen and ink that Seuss used in his children's books. 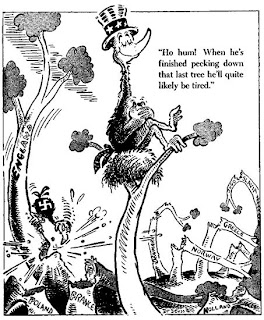 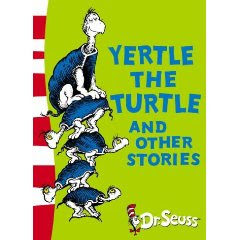 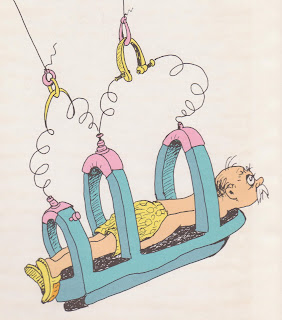