Frank Owen Gehry was born in on February 28, 1929. He received his undergraduate degree in architecture from in 1954 and for the few years after, he worked full time for various firms including Victor Gruen Associates and Pereira and Luckman Associates. Gehry then studied briefly at Harvard University’s Graduate School of Design and spent a year in Paris working for André Rémondet and studying great architects such as Le Corbusier and Balthasar Neumann before returning to the states and opening an office in Santa Monica in 1962 (About Frank Gehry: A brief biography). His practice expanded and in 2002, the Gehry partnership, Gehry Partners, LLP, was formed. Frank Gehry himself heads every single project that the firm undertakes and sees each project through to completion with the help of his staff as well as “Digital Project, a sophisticated 3D computer modeling program originally created for use by the aerospace industry, to thoroughly document designs and to rationalize the bidding, fabrication, and construction processes.” (GehryPartners LLP) Frank Gehry’s works include but are not limited to the Walt Disney Concert Hall in , in , Dancing House in , and his own private residence in .

Frank Gehry has described himself in the past as "a symmetrical freak and a grid freak" (architecture + process 140), but when we realized this was holding him back, he began to design by focusing on the forms that make up his structures. 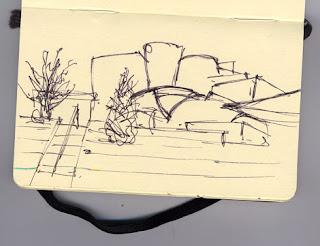 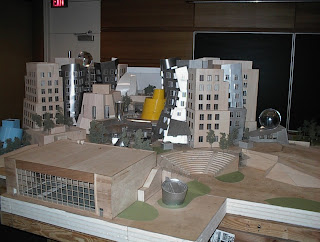 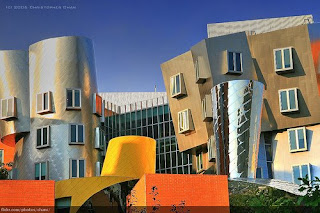 These are a series of pictures showing the Ray & at MIT's development. The first shows Gehry's original sketch of how he visualized the project. As you can see, Gehry's sketches are extremely messy with no real defined shapes or distinguishable features. He does a lot of scribbling and conceptualizing while putting his ideas down on paper, resulting in vague drawings that make viewers unable to form the final product in their minds.

The second shows a design model in the process of being changed according to Gehry's desires. Similar to his sketches, Gehry's design process models are very messy and involve a lot of crumpled paper or various textures that can be achieved from everyday items. His models seem more artistic as opposed to architectural. In fact, when I first saw pictures of his models I wondered how they could possibly translate to actual structures on a larger scale.

The third photograph shows the final design model for the building. Obviously it looks more polished than the design process models and does resemble a building. However, it still retains its artistic qualities and curvilinear edges that make it unique to Gehry's style of design. 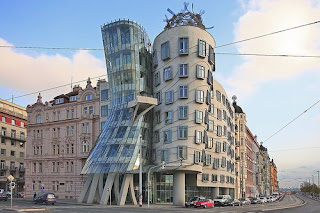 These two pictures are of the in Gehry designed in the mid 90's. Once again, the first is a sketch of Gehry's design done with the same messiness as the . I found it interesting while reading about this building that after Gehry designed the first tower resembling a dress, everyone involved laughed at him and Gehry said in his interview that "They didn't understand where [he] was going" (architecture + process 170). I think that is a prevalent characteristic of Frank Gehry's.

The second photograph is of the finished building. You can make out the shapes that Gehry drew originally in the final design but the details found in the structure are not represented in the sketch. I absolutely love the way this building looks because it is extremely playful with the wavy lines and the random placement of windows. It has a cartoon-like feel to it and I think to be able to pull this off in a building is phenomenal.