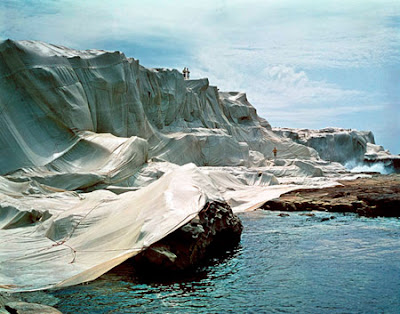 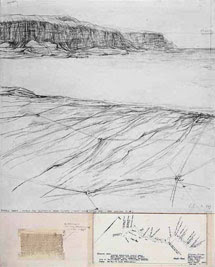 "Wrapped Coast," 1 million sq. ft., Little Bay, Australia, 1968-69
Christo and Jeanne Claude are an artistic duo who take on massive endeavors that engage the world through their art. Their site-specific projects involve using expanses of synthetic woven fibers wrapped around unexpected structures. The projects are personally funded by Chirsto and Jeanne Claude through the sales of their preliminary sketches and small scale models of the eventual project. What's particularly impactful about their work is that the implications of the piece reach past the physical art piece to include the interactions and the effects of the piece in a community. The result of Christo and Jeanne Claude's work is a community involved in the realm of art and a visually unexpected structure.
Wrapped Coast began as idea that was then sketched out by Christo and Jeanne Claude. The sketches were then sold to help fund the realization of such a project. In this case, the sketch is not really sold and valued as a mark of artistic merit, but rather as an idea; people were buying an idea. Christo and Jeanne Claude did not necessarily need the sketches as documentations or plans of their ideas for personal use; the idea and image were already in their heads. They would wrap the coast of Little Bay, Australia with one million square feet of the white material tied down by industrial rope, accentuating the contour and silhouette of the coast. The coastline looks as if someone were trying to hide it from the world but at the same highlighting it. Obviously, it takes many hands to make such a lofty project. Christo and Jeanne Claude employed many people to construct their pieces, comprised of engineers, construction workers, willing volunteers (fans of their work), and other people not usually involved in the realm of art, let alone the actual creation of art. They managed to introduce and involve a wide spread of people into the art world. 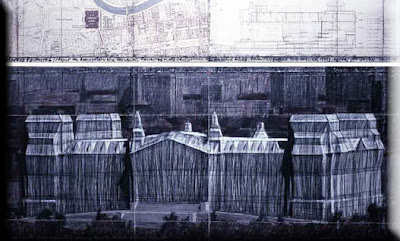 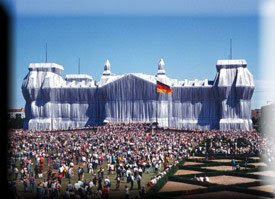 "Wrapped Reichstag," Berlin, Germany, 1971-95
It is important to note the dates of Wrapped Reichstag:1971-95. However, it was only put on view for two weeks. Christo and Jeanne-Claude had thought of the concept and began raising funds and battling nay-sayers in 1971. After decades of overcoming obstacles and figuring the logistics out, the Reichstag was wrapped. Christo and Jeanne-Claude viewed the entire process as part of the art, the interactions, the discussion. The couple appreciated and exercised the power of their ideas, that the minute they propose one of their pieces, people's lives change in relation to the art; their art deeply permeates society. The street artist's subject changes, lawmakers look at legislation related to the building, news stations' broadcasting material changes, people's conversations were redirected to focus on this. All of this is ultimately part of this piece. Looking at Christo and Jeanne-Claude's preliminary sketches, they look surreal and from fiction. It seems out of the ordinary and absurd for a building, a coast, trees, or a bridge to be wrapped in fabric, much like Rene Margritte's surreal portraits of people with fabric covering their faces. And in reality, the drawings do depict something not yet real. But Christo and Jeanne-Claude boldly take the next step and transfer their drawings to the real and tangible world. 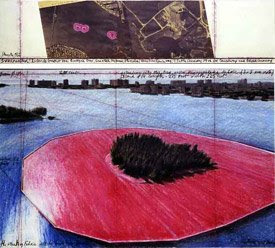 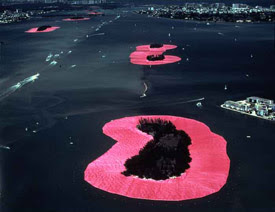 "Surrounded Islands," Miami, Florida, 1980-83.
Christo and Jeanne-Claude were commissioned to do an installation for a Miami art festival. They used Miami's culture of the connection of land and sea to create their Surrounded Islands, 11 islands surrounded by 6.5 million square feet of industrial fabric. Many of their works involve the environment while tactfully not harming it, thus bringing about environmental awareness. In making this piece, the artists had to work with a panel of lawyers, marine biologists, ornithologists, engineers, and construction consultants, showing their pervasion into and activation of a variety of realms of society. Once again, the sketches were sold to help pay for the project, rather than being kept for Christo and Jeanne-Claude's personal references. The scope of their pieces is always farther than what can be seen.
References:
Fineberg, Jonathan. Art Since 1940: Strategies of Being. 2nd Ed. Prentice Hall. 2003.
"Five Films about Christo and Jeanne-Claude." Maysles Films Production. New York:Plexifilm. 2004.
Posted by Nina Wu at 9:38 PM