As a Massachusetts native, I naturally chose an artist from my home state whose work I loved as a child.  Norman Rockwell’s style always intrigued me because his paintings and drawings resemble photographs.  Best known for his cover illustrations for the Saturday Evening Post, Rockwell’s art also appeared in the Tom Sawyer classics, Life, Literary Digest, and Boys’ Life.  His contributions to these publications share a common theme: Rockwell’s vision of the glory of ordinary American life.  I thoroughly enjoyed my research because each of Rockwell’s drawings and paintings is a masterpiece, and carries with it some vital aspect of the American spirit.

This quintessential American artist was born in 1894, and did not waste time developing his artistic abilities. As a child, he enjoyed drawing pictures from literary classics while his father read to him.  After a few fruitless years spent in high school, he joined the Art Students League in 1910, and received his first artist “job” as a contributor to a children’s series. He then took a job as the art director of Boys’ Life, a popular Boy Scout magazine at the time.  In 1916, after more success contributing to other reputable publications, 22-year-old Rockwell took the plunge and sent in a cover illustration for the Saturday Evening Post.  He thus began the most famous portion of his career, and completed 321 covers in total. Rockwell's influences included N.C. Wyeth, J.C. Leyendecker, Maxfield Parrish, and Howard Pyle, all famous illustrators at the time.  Many art critics consider him a genre painter, which may explain his success with the Saturday Evening Post.  In the 1930s, he created drawings and paintings for a new release of Mark Twain’s Tom Sawyer series.  Later on in life, he joined Look magazine, which allowed him to paint with a more political bent.

Rockwell’s success is not surprising. Each cover poignantly portrays a human or American experience, such as a girl’s first date or a father-son fishing trip.  In fact, his ability to appeal to core American values captured the attention of President Ford who, in 1977, presented Rockwell with the Presidential Medal of Freedom.  Rockwell died in Massachusetts in 1978, leaving behind a rich body of work.  Rockwell lovers, myself included, continue to visit the Norman Rockwell Museum in western Massachusetts. 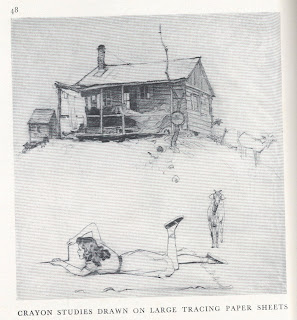 My first choice is a study (approximately two feet wide) in crayon for one of Rockwell's more famous paintings.  I chose one of his studies in order to illustrate his method: Rockwell first found a scene, took many different pictures of it, sketched it many times, made detailed studies of the more intricate elements of the scene, and finally painted it. In his own words, Rockwell was primarily concerned with "selecting the best of the reference material and refining and combining it to serve my purpose" (Guptill 48).  Thus, he produced this drawing in the middle of the process.

Even though this is a rough sketch, it demonstrates his ability to quickly draw details. While I primarily think of Norman Rockwell as a line-oriented artist, he employs a wide range of values on the shack in the background.  His line work is impressive, particularly because he seamlessly fuses line and shading.  Yet, as evidenced by the beginnings of the outline of a goat in the right corner, he seems to be an expressive artist, in that he moves from the general to the specific, at least in drawing animals and people.  Finally, his depiction of the young girl is incredible: the drawing is life-like, almost like a photograph, yet breathes Rockwell's style.  I particularly like the girl's hair: he realistically captures the effect of the sun's rays on the gloss of her hair without making her a cartoon character. 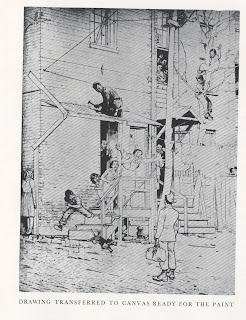 My second choice is a detailed outline for another of Rockwell's famous paintings.  I find his line work particularly apparent here, although he does employ shading and value to capture the positions of the men working on the roof and peeking out of the house.  His outline seems to have a cartoon-like quality, which is not apparent in the final painting.  I find this particularly interesting, because as I was doing my research, I found that Rockwell enjoyed doodling cartoons, and must have incorporated this into his work.  Yet, in looking at the final painting, his use of value diminishes the cartoon-like effect.

As in the first drawing, I first noticed his ability to render life-like figures.  I can only conclude that he has mastered the human condition because he captures the full gamut of human emotions in the faces of his subjects.

I suspect that Rockwell did not use a ruler heavily. Although his line-work is very exact, there are small fluctuations in the straightness of his lines on the steps, the roof, and even the windows.  I may be biased because I don't like using a ruler, but I think that this makes his work even more life-like, because he captures the natural imperfections of our world.  However, I suspect he carefully copied from photographs, or he would not have been able to create the proper depth and perception.  Maybe this is the reason why his paintings almost look like photographs!

Finally, his details, or lack thereof, on the bricks truly bring out their texture.  It looks as if he used his eraser quite a bit on the building.  In fact, he may have used contour techniques on the trees, as they have very little detail save for their outlines. 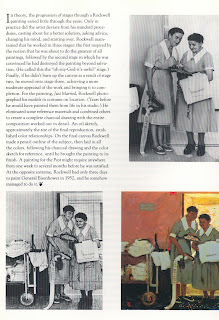 For my third drawing, I chose to show a part of each stage in Rockwell's process for his painting "Just Married." On the upper right is his principle photograph, on the bottom left is a fully developed charcoal drawing, and on the bottom right is a color study with oil paints.  His use of shading and value is more apparent in this drawing than any of the previous drawings, which makes sense, since he was trying to capture the intricacies of the two individuals.  However, he injects his own style, even humor, into his rendering. The two women look more caricature-like in his drawing, even though they resemble the photograph very well.  I believe this drawing fully captures why Rockwell's work was, and continues to be, a hit with the American public: his drawings bring out the emotions of the characters, which in turn attract the viewer to his painting.  The two women are stereotypical old cleaning ladies: while they snoop around, they do so with a twinkle in their eyes, and we the viewers forgive them for it.

After looking through multiple volumes of Rockwell's work, I love it even more. Although some of his situations may seem idealized, they remind me of why I love American values.  I suspect Rockwell was a traditionalist, in that he held tightly to traditional American values while the world rapidly changed.  His mentality, captured in his paintings, speaks to those who feel the same.  Christopher Finch, one of the authors of my resource books, explained my sentiments perfectly: "Norman Rockwell created a world that, because of its traditional elements, seems familiar to all of us, yet is recognizably his and his alone. He is an American original who left his mark not by effecting radical change but rather by giving old subjects his own, inimitable inflection. His career has been an ode to the ordinary, a triumph of common sense and understatement."