Marcel Duchamp was from a respectable provincial family in Blainville, France. He began painting at 15, experimenting with impressionism. As he matured, he used techniques from cubism and fauvism, but he refused to limit himself to the boundaries defining these styles. Duchamp believed that “painting should not be exclusively retinal or visual; it should have to do with the grey matter, with our urge for understanding.” Following this belief, he strove to rid art of its definitions and connotations, forcing the public to think about what a work of art actually is. His artwork spans a variety of mediums, from painting to sculpture.

Unlike other artists’ works, in which visual links can be traced from painting to painting, Duchamp’s pieces contain more of a thematic connection. Many of his works highlight the themes of sex, dreams, longing, machines, and the questioning of what art actually is. One of his most famous paintings, Nude Descending a Staircase, No. 2, illustrated the “static representation of movement” through Cubist faceting and underlined the “machine aesthetics” of the figures. Though he used Cubist techniques in his painting, he added vitality and movement to it, illustrating the limitations of Cubism. The lines in this painting suggest that he first sketched out the movement of the subject before adding color in a combination that represented movement. Yet, Duchamp’s style illustrates a tendency towards straight lines and angles, in a mechanization of human figures. This theme is repeated in The Passage from Virgin to Bride and laid the foundations for The Bride Stripped Bare by Her Bachelors, Even (also known as The Large Glass). The Large Glass occupied much of his attention from 1914-1923, though he never seemed to devote his full attention to art. This piece included many of the devices used in previous works, such as the chocolate grinder and the use of machines for human figures. This work depicts the interaction between female and male desires and fate. Though the piece itself is still, it is meant to be in motion, but it is delayed in glass, a moment suspended in time. The bottom pane contains the Bachelor Apparatus while the top contains the Bride; they are separated by the horizon, destined to remain apart. This cryptic artwork was complemented by a set of notes, which Duchamp said was necessary for understanding his work, promoting the idea that art could be intellectually engaging.

Humor was also a major part of Duchamp’s artwork. While he worked on The Large Glass, he also created many Readymades. These were manufactured products that he altered slightly and displayed as art. Examples include L.H.O.O.Q. (a slightly altered painting of the Mona Lisa), Fountain (a toilet), and Bottle Rack (a manufactured bottle rack). L.H.O.O.Q. is perhaps one of his better known Readymade. This piece consists of a reproduction of the Mona Lisa with a penciled-in mustache and the title. The title is a pun, which, when spoken in French sounds like, "Elle a chaud au cul" or that "She has heat in the ass,” suggesting that she is horny. In drawing humor from such a classic work of art, Duchamp defied established views of art. His Readymades suggested that art could be made from anything and required little effort from the artist. This theme was further suggested in Three Standard Stoppages, in which he dropped 3 threads and preserved the shape in which the threads landed.

Duchamp’s work reflected similar thoughts and themes explored by the Lost Generation, such as Virginia Woolf and Ernest Hemingway. Similar to these contemporaries, he rejects established conventions, finding a style suited to him. For example, through The Chess Players, Duchamp demonstrated that art could display thoughts in the chess players’ minds (an invisible world). Duchamp also believed in the androgynous mind; he created a female alter-ego name Rrose Selavy, a work of art in herself, signing some pieces with her name. This showed the break down of gender differences and social conventions. Duchamp’s departure from conventional styles of art with its wide array of colors and aesthetic form challenge what is aesthetically appealing, focusing more on the themes that they want to convey.

I personally find Duchamp’s works fascinating. I tend to prefer modern art because it seems so creative and dramatically different from traditional aesthetics. Duchamp certainly pioneered the way for many modern artists of today, challenging them to think about what defines art. In fact, his work still affects the artists of today. In Shigeko Kubota’s Duchampiana: Nude Descending a Staircase. 1976, which is currently on display at the MOMA, Kubota uses TV screens to convey the same movement as Duchamp did in his paintings. This artist seems focus more on the subject’s face, perhaps commenting on how the themes Duchamp presented are still valid even in modern day society.

Nude Descending a Staircase, No. 2 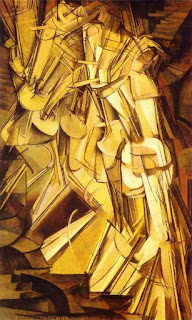 The Bride Stripped Bare by Her Bachelors, Even 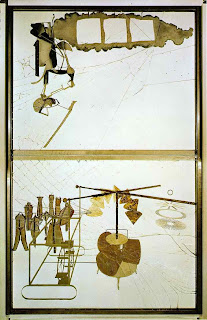 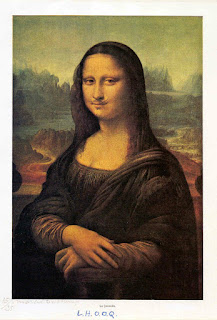 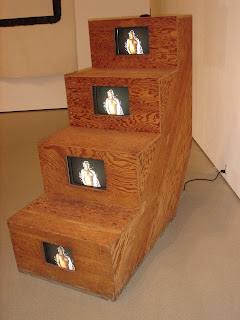