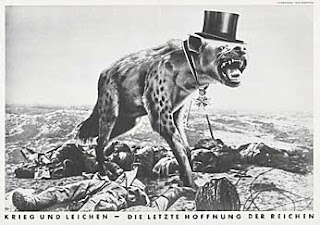 John Heartfield is a 20th century German artist that developed a type of art where he would montage a mix of different photos in attempt to portray his narrative to his audience. I chose John Heartfield particularly because i am a history major with a focus on military history particularly World Wars I and II, which is right around the time Heartfield became particularly famous especially in Germany. Heartfield was born 18 June 1891 by the name of Helmut Herzfeld but changed his name in 1916 to John Heartfield because to satirize the anti-British sentiments in Germany. Heartfield was a communist in Germany and was against all his nationalistic counterparts. Thus, his name was a joke for him to have in Germany at the time. When the nationalists took power in 1933, Heartfield left Germany for Czecheslovakia where he would do the majority of his famous artwork. John was particulary anti nazi and tried to portray the Nazi's as to undermine their propaganda. In 1938, he left his host nation for England because Germany invaded. He moved back to Germany after WWII and he died in April 1967. 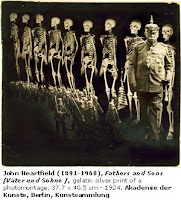 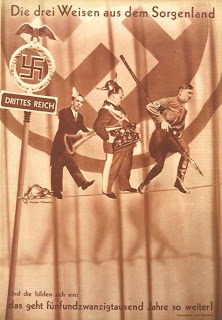 I chose Heartfield because of important historical era in which he did his work, but i truly believe his work has powerful messages even though most of his work is political satyre. Political satyre has always had a place in history and his work in Europe is important from a historical perspective. Germany did not allow many anti Nazi printings to make it to press but somehow Heartfield was able to make his voice heard.
Heartfield's art may not be modern persay, but he paved the way for photomontage of the future and political satyres that are presently used. He is a little known artist to us but historically, he is an important figure, and I hope you enjoyed some of his work.
Posted by Mike Ness at 5:49 PM