Pablo Diego José Francisco de Paula Juan Nepomuceno María de los Remedios Cipriano de la Santísima Trinidad Ruiz y Picasso (Pablo Picasso) was born October 25th 1881 in Malaga, Spain. His father, Don José Ruiz y Blasco was also a nature painter who specialized in painting birds as well as an art professor. His father began training him in figure drawing and oil painting at the age of seven. Picasso flourished under the tutelage of his father, becoming so fascinated with art that his school work began to suffer. In 1891, Picasso’s family moved to so that his father could serve as a professor at the . After the death of his younger sister, Picasso’s family moved to where Picasso was admitted into the at age 13. While at school, Picasso was undisciplined; however, his charismatic personality earned him many friendships that would be continue throughout his lifetime. Later, at age 16, Picasso attended the very prestigious Royal Academy of San Fernando in . Unfortunately, his poor studying habits followed him, and he soon stopped attending his classes. In 1900, Picasso moved to where he lived in great poverty with his friend, the poet Max Jacob. In , the artist was so poor that he had to burn his paintings for warmth. Nevertheless, it was in that Picasso rose to fame as a painter.

Although noteworthy for being the cofounder of Cubism, Picasso’s style actually went through several different phases. His training with his father was extremely tradition, and consequently, his earliest paintings emphasize realism. After moving to , Picasso began painting more somber pictures, often portraying prostitutes and beggars in depressing shades of gray and blue. This style is juxtaposed by the next stylistic trend of Picasso, called the Rose Period. During this period, Picasso drew more cheerful subjects such as acrobats and clowns, using warmer colors. Around 19 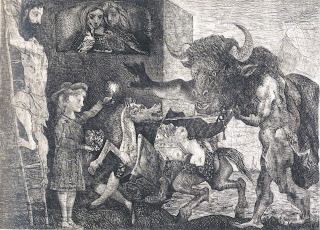 09, Picasso and George Braque began the cubism movement. The movement consisted of taking apart objects and analyzing them for their shape, resulting some very abstract results.

Minotauromachie was made in 1935. Often considered the author’s greatest print work, Minotauromachie shows a girl leading a blind Minotaur. The piece exists as an engraving. An interesting point about this piece is the convoluted narrative that it tells. The strange nature of the layout makes it difficult to tell exactly what is going on, leaving much of the story to the viewer’s imagination. 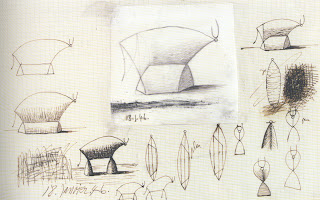 Studies of Bulls was made in 1946. The drawings are done in pencil with collage. The bull motif carries over from the Minotaur piece. This work illustrates Picasso’s mastery of stylization. Here he effectively reduces the bull to the minimum number of lines necessary. Yet it is still possible to tell what the subject is. 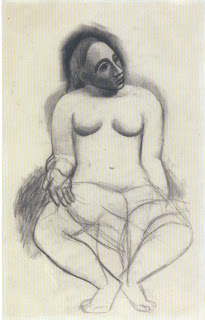 Seated Nude was made in 1906. The piece was done in Charcoal and is indicative of a shift in Picasso’s work. Seated Nude marks the end of the “Rose Period” in which Picasso often drew very skinny acrobats and street performers. From this point on he began adding more weight to his subjects. The replacement of the subject’s face with a mask almost implies some sort of social commentary, although the artist never gave one.