Yayoi Kusama is a Japanese contemporary artist, born on March 22 of 1929 in Matsumoto, Japan, whose primary medium involves installations and sculptures but also extends to painting, film, fashion and many more. She has described herself as an "obsessive artist" with a Pop Art and Minimalist style. Her artistic endeavors began during her childhood when she began to have hallucinations that often involved a vast amount of dots. These dots inspire a large portion of her creations and correlate with the obsessive nature of the repetition of the dots within the individual pieces. Along with dots, pumpkins are also a common theme in her pieces. This emphasis on pumpkins, similar to the dots, began from a hallucination, where a pumpkin was growing on a vine and began to speak to her.
She views art as extremely therapeutic and uses it as a way to help with her mental health. She states, “I fight pain, anxiety, and fear every day, and the only method I have found that relieves my illness is to keep creating art." 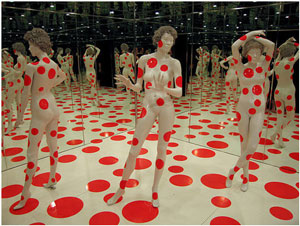 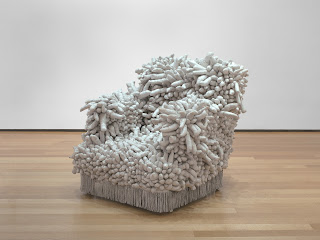 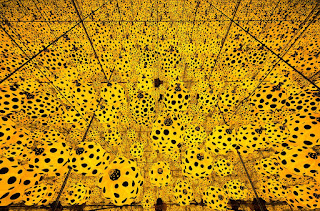 THE SPIRITS OF THE PUMPKINS DESCENDED INTO THE HEAVENS (2015), Kusama

She only had a small number of formal training at the Kyōto City Specialist School of Arts from 1948-1949 and then moved to New York City in 1957 after a family conflict and strong desire to become an artist. Kusama moved back to Japan in 1973 and admitted herself into a mental hospital in 1977, where she continued to make art.

I decided to choose Yayoi Kusama for this assignment because I love the boldness of her designs. All of her pieces are so vibrant and eye-catching; I aspire to create work with such a piercing style. I also resonate with her motivation in making art. I, too, use art as a way to express myself and cope with certain emotions. I believe it's amazing to be able to make beautiful things out of difficult circumstances.