The book in Lilly Library that highlights the work of Max Beerbohm is titled, "Max's Nineties." Intrigued by the vague name, I began to sift through the interesting and often absurd caricatures published by the artist. Still confused by the title, I began to read through the intro. Max was born in 1872, and though he published work throughout his life, this book explains that his caricatures became popular during the early 90's, when he was only 17 years old! 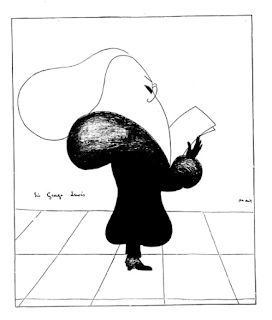 He often used pen or pencil and simple line-work to create distorted, cartoonish images of wealthy elite members of London's upper-class. His first major break came with the publication of "Club Types," which is pictured below, which he drew at 20 years old. Max studied at Oxford University and continued his life in a career of writing and drawing caricatures. 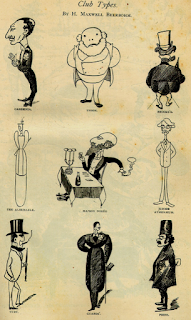 I was intrigued by his drawings because of how drastically he distorts the characteristics of his subjects, and his use of patterns while keeping line-work simple. In some of his work, he uses drastically different patterns to differentiate between articles of clothing. But in others, he varies his line weight to do the same. In lieu of shading, he utilizes cross-stitching in a typical, political cartoon fashion. His drawings often lack any form of background, and solely focus on the individual he is capturing. When there is a background, it is often a simple horizon line or a couple outlined floorboards. 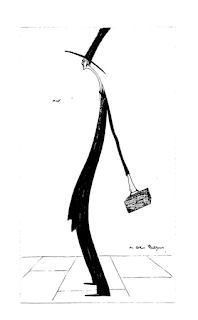