Georgia O’Keeffe was born in November 1887 in a small Prairie in Wisconsin. Her parents moved to Williamsburg Virginia for the warmer climate and arable land. She grew up mildly disinterested in general education but relished her art classes. This passion for art led her into some of the best art schools at the time from the Art Students League in New York, Art Institute of Chicago, and University of Virginia. She became a commercial artists at the young age of twenty-one while also teaching art in various spots around the United States.

At each location visited she incorporated geographical, physical, stylistic elements into her work. This can be seen with the following images. She went on to become one of the most inspiring and influential artists, she passed in 1986. 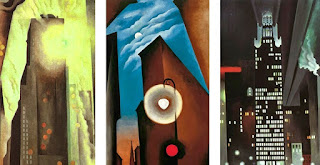 O’Keeffe painted these while studying at the New York Art Students League from 1925-1929. One can see the infusion of city life and  landscapes of New York in her work. She was heavily influenced by Modernism in New York. She was exposed to modernism by Cubists and Post-Impressionism of Picasso and Sullivan. This is where she began to create her own unique style, experimenting with her own creativity.

While teaching throughout the United States one of her memorable stays was in New Mexico, where O'Keeffe was immersed in lovely desert landscapes, sunny weather, and New Mexican and Native American culture. One of her famous works created in 1931 is shown above titled "Cow's Skull Red White Blue." 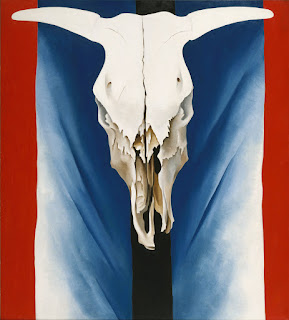 Along with being a brilliant painter, O'Keeffe was an inspiring feminist (although she did not like labels). She often had to deal with being a woman in a heavily male-dominated field. She was quoted saying "Men like to put me down as the best woman painter, I think I'm one of the best painters." She fought back against gender norms especially with her work in which she questioned gender. In her work of nature and flowers, there is an erotic component from the innately feminine depictions. Many of her flower paintings look like parts of the female body, such as the painting below made in 1920 "Abstraction Seaweed and Water." Below are various flower paintings. 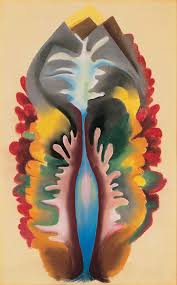 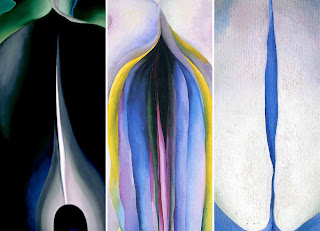 Styles and Techniques
O'Keeffe utilized many varying skills in her work from water color, pastels, charcoal, paint, and much more. She was trained at an early age to appreciate art and use her creative styles in her own work. In art school she learned the basics which she takes with her in every work, the basics meaning her line work, color, shading and value, and composition. O'Keeffe enjoyed color to the fullest extent and used value to bring energy and attention to her paintings. One of her techniques was to use a sketch book, as we have in class to practice. Below some of her sketches are shown. 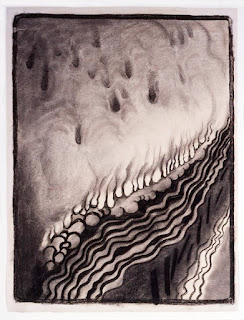 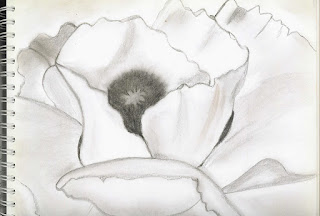 Conclusion
O'Keeffe was a pioneering figure in her time who influenced many other artists after her. She formed a new definition of what it meant to capture the West in art. Her art is in museums all over the world and appreciated by many.