Christian Marclay is a present-day New York based artist who combines musical and visual arts into unique sensory experiences. Born in San Rafael, California on January 11, 1955 to a Swiss father and American mother, Marclay grew up in Switzerland and studied at the Ecole Supérieure d'Art Visuel in Geneva (1975-1977) before earning his Bachelor of Fine Arts at the Massachusetts College of Art (1977-1980). As a student, Marclay experimented often with sound, using thrift store acquired records and turntables as instruments. He cut records and reassembled fragments in unique configurations.

“I was interested in what artists like Vito Acconci or Joseph Beuys were doing with performance and I was also very interested in the energy of punk rock.”

Marclay noted that living abroad and returning to the United States drew his attention to our culture of waste and excess.

“That’s what surprised me about American culture: its excess, the prevalence of so much waste.”
This perspective allowed him to appreciate broken records and defects as tools, not waste. Noticing the blemishes in his mixed record-encoded music—the “unwanted sounds, clicks, and pops” as he described—Marclay further explored the use of noise. Using his innovative senses, Marclay once resolved his inability to recruit a drummer for his band by producing a mixed LP played in a loop. These experimentations with noise were carried through in later visual representations as onomatopoeia represented in action painting. In this style, something that sounded wet would look wet, for example.

These recent paintings keep with Marclay’s musical background. Sound directed his paint actions—each sound he heard in the paint was marked using tools ranging from sponges and mops to water pistols. Just as records and turntables, Marclay also treated his action painting tools as instruments that he used in the “private performance” of pigment meeting the medium. To finish these paintings, Marclay visualized the onomatopoeia using screen printing, rendering the words to look the way they should sound. 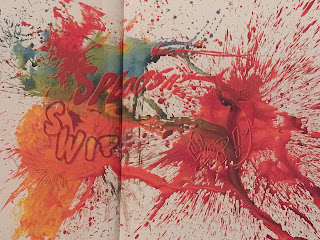 Another unusual way Marclay combined the audio and visual experiences was through his cyanotypes series. Cyanotypes were historically used as low-cost methods to duplicate drawings and gave rise to the term “blueprints” as they used photosensitive dyes that turned blue. Using this nineteenth century technique, Marclay collaborated with the Graphicstudio at the University of South Florida to produce these works. The most recent cyanotypes included magnetic audio cassette tapes pulled out into disheveled patterns. Using two obsolete technologies—the audio cassette and the Prussian blue dye itself—Marclay seems to speak to the spontaneity of his musically inspired art. 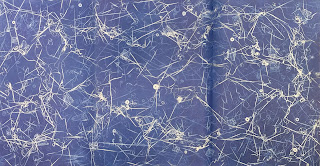 Marclay has worked with the Graphicstudio multiple times in the last decade. Manga Scroll combines his theme of stochastic cut-and-paste with the visualization of onomatopoeia. Printed on rice paper, Manga Scroll is meant to be a performance through voice.


Why I Chose Marclay
I was first intrigued by Marclay’s action paintings, which gave a feeling of having an extra dimension through the way they simultaneously display how something sounds and feels. Playing music myself, I was also interested in the ways he incorporated his experiments with sound into visual art. I enjoyed seeing his musical background appear in some form throughout his art, even as he transitioned between media and forms. Finally, while there are numerous historical artists with well-known works, it was interesting to explore present-day artists, their techniques, and how they continue to create.