We all know Leonardo da Vinci (1452-1519) for his paintings, sculptures, and intricate designs for flying machines. But his study drawings may also be of interest to anyone who’s ever doodled on a napkin or in their notebook.

A few words about the man and his art

Da Vinci was a leading figure of the Italian Renaissance; a painter, sculptor, architect, inventor, draftsman, and military engineer. Interestingly enough, fewer than two dozen paintings have been attributed to him – with interests so varied, it makes sense that he wasn’t a particularly prolific painter.

Da Vinci was born in Tuscany outside the village of Anchiano to a respected Florentine notary and a peasant woman. As a child he received little formal education, but began an apprenticeship with artist Andrea del Verrochio at age fourteen. He later spent seventeen years (from 1482 to 1499) as a military engineer for Ludovico Sforza in Milan. It is during this period that da Vinci was also commissioned to work on several now-famous paintings, including The Virgin of the Rocks and The Last Supper.

From 1500 to 1508 da Vinci studied math and architecture in Florence, and entered the service of Cesare Borgia as senior military architect. (From this point on, da Vinci's work moves further away from drawing/painting, and thus, to keep this post focused, I will end the biography here.)

Da Vinci’s approach to art was unique: he did not see a divide between it and science, but viewed the two as disciplines intertwined. He thought sight was humankind’s most important sense and eyes its most important organ, and believed the best way to accumulate knowledge was through observation. Da Vinci practiced what he preached as well: beginning in the 1480s, be studied anatomy at length, and what he learned by dissecting human and animal bodies informed his art.

Why did I choose da Vinci’s study drawings, of all things?

It always interests me to see how fellow creatives discover and process their ideas on paper before committing it to artwork. I keep several sketchpads lying around in case I stumble across something worth illustrating, but my art rarely ever sees the light of day. Looking at the works of great masters like da Vinci, one can only wonder how many crude pages of sketches, observational drawings, and mockups went into making the polished final product. Da Vinci himself was known to jot down observations on loose sheets of paper and pads he tucked inside his belt. So I set out in search of those drawings. And found several curious ones.

Please note: my art vocabulary isn’t the best (I’m not a VMS or Art History major), but I'll try to be v. descriptive.

First up is a drawing titled a study of arms and hands. The chiaroscuro's cool, but what's especially interesting to me about this one is how da Vinci plays with line weight/quality: heavy, harder lines on the hands make them leap off the page, while softer, more scribbly lines on the forearms slow down the viewer's eye. A third unfinished "phantom hand" hovers behind the bottom one, almost as if da Vinci were testing out a pose but decided that hand would look better raised. And if you look closely, you can see a quick caricature sketched in the top left! 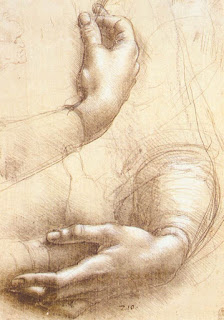 Next is a study of lilies for The Annunciation. No two flowers look alike or seem as if they were drawn by formula. Da Vinci likely based this drawing on a live lily. 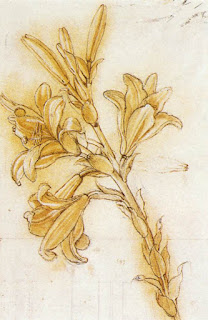 This third drawing is titled Study of the proportions of the head and body. (Yes, there are bodies in the original, but I cropped it to focus on the head.) Da Vinci is practicing head-profile proportions in a way similar to how you and I likely learned to draw them. (One difference being - and I can't speak for everyone here - my method didn't involve boxes.) 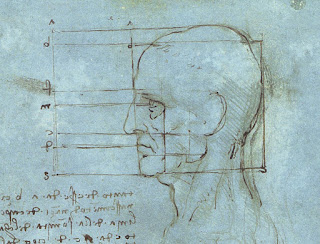 One of my favorite subjects to draw is the head in profile. It's a great opportunity to play around with noses and facial structure. Here are two of da Vinci's studies of heads in profile (again, part of a larger page of heads). He probably drew these from observation - from sculptures, if not from real people. 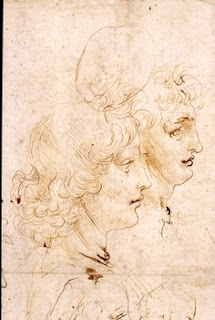