Andrew Wyeth was born July 12, 1917 in Chadds Ford, PA. Andrew was the youngest of five siblings. Due to his fragile health, Andrew was pulled out of public schooling before first grade, and was instead taught by private tutors and relatives. Andrew's entire family was known to value creativity and imagination with his father, N.C. Wyeth, being a highly noted illustrator and painter. Andrew's father was highly critical of his work and was the starter of his formal art education. In the spring of 1933, Andrew began working at the Kuerner Farm in Chadds Ford. It was here where the neighboring property owned by two German immigrants became the main subject/theme of Andrew's works for the rest of his life. Andrew died at the age of 91 in January 2009. 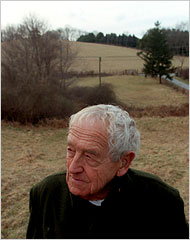 Andrew's style can be best characterized/classified by realism and regionalism. Realism is a style in which the artist depicts the subject matter as realistically as possible. Regionalism, on the other hand, is an American realist modern art movement where artists began to pursue local and rural scenes/themes and shun urban city life and technological advances. This movement arose around the time of the Great Depression. Andrew enjoyed studying art history and was particularly fond of the Italian Renaissance, the Rococo movement, and Romanticism. His works have been influenced by other American artists such as Winslow Homer and Edward Hopper.

Andrew Wyeth's preferred forms of media were initially pencil and a technique called "dry brush" before being introduced to tempura and watercolor (in which both then became his two main medias). Many of his works are first done with dry brush before being painted, often resulting in changes in mood, tone, and details between the two forms.

Andrew's works have been highly controversial, sparking debates on the nature of modern art. While many of his works appear to be realist, there are aspects of abstraction within them as well. Although many of his works seem to be accurate and realist depictions of the rural countryside of New England, many people often overlook small changes such as the suppression of certain details, narrowing/widening of a space, careful adjustment of light, etc. In changing these certain elements, Andrew was able to increase the drama of his pieces and even change the seasons depicted in his work. 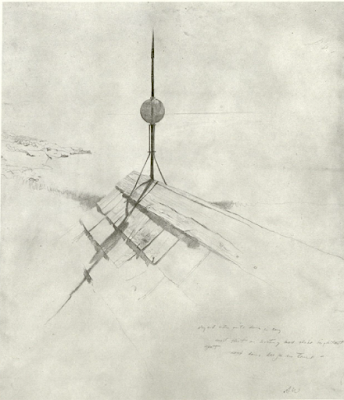 This pencil drawing illustrates a sharp lightning rod on the shingle roof of the house. Beyond the house in the background appears to be a shoreline of some kind consisting of rocks and grass. What is most striking about this drawing is the stark contrast of light and the casting of shadows by the lightning rod and the shingles. This is just one of the many illustrations by Wyeth where plays with light to create a mood. In this case the mood appears to be lonely, tranquil, and somber, a common theme that emerges in his works. 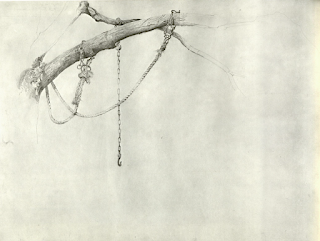 This sketch of ropes and chains on a tree branch is actually a preparatory study for his work Brown Swiss. One common theme I have noticed in Wyeth's works is his strategic use of space. Many of his works usually have the center of the subject/center of attention in a small area of the piece, whether it is the corner, center, or horizon. His works often leave much empty space which helps create his common mood of somber loneliness. 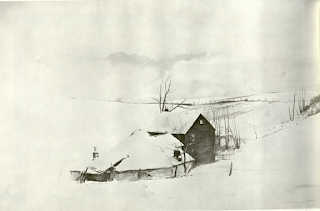 The Corner is actually a piece done in dry brush in gray, brown, and red accents. This painting shows two lonely buildings situated on a snowy hillside with a few barren trees scattered around. In the background rests a small rickety wooden fence. Again, this piece portrays a very lonely and gray mood. The main subject of the houses can be found in the center of the piece drawing the viewers attention. The rest of the drawing is much more mute. Sharp contrasts in lighting can be seen with the dark wooden sidings of the house and the white snow-covered roofs and countryside.

This work is a well-known piece that is heavily connected to Wyeth's childhood. The painting shows a young bull standing alongside a stone wall in the early morning sunlight. In the top left is a white rectangular house, and in the right is a gently sloping hill. The wall in this painting is the wall of his German neighbor, a sight he was very familiar with. It is known through letters that this painting was inspired by a traumatizing experience for Wyeth, where one morning he was walking toward his neighbors property when he saw the chains and ropes which his farmer neighbor used to slaughter his hogs. Wyeth returned to the same place another day where he then saw a young brown Swiss bull held by the wall by his owner. Wyeth performed sketch after sketch until the final dry brush was finished three years later. Elements of lighting can again be found in this piece, with the early morning sun casting stark shadows on the young bull and the stone wall.

The reason I chose Andrew Wyeth was because I was immediately drawn to the common somber and lonely mood of all his drawings. As mentioned earlier, this was because of the start contrasts between dark and light and his use of empty space - something that really appealed to me. Because of this, I could immediately tell that there were stories behind all of his illustrations and made me very curious to learn more about each subject and his background.