For the second of the five pieces, I want to play with the idea of isolation. I did not have as much time as I had hoped to work on sketches this week, but I luckily had an idea in mind already. The picture attached shows two thumbnail sketches of a woman figure in the fetal position or curled up. Both are very similar in that they would be B&W, most likely with graphite, with a negative space background meant to further convey the loneliness and isolation of the protagonists. This piece will most likely employ dynamic and strong shading to contrast the black and white. 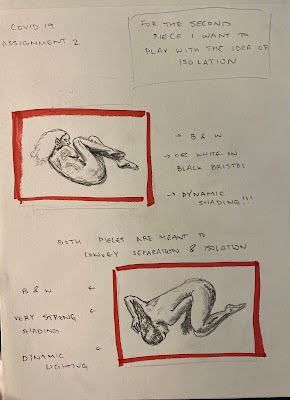