I've had a few ideas swimming around in my head for this project, and I feel like a major issue I have is bringing them to life and connecting them. I know I don’t have to connect all of my pieces, but I do want my drawings to have some sort of connection and cohesion (other than the theme of COVID-19).

I was thinking of working with a few different concepts. One being something along the lines of being Asian during this pandemic. It’s just something that I was really conscious of whenever I was travelling and it didn’t feel nice, which is really sad. I felt like I had to cover myself up, not for health reasons, but because I wouldn’t want any unnecessary stares. Because of this, I was thinking of combining two pieces into one essentially (but using two pieces of paper still). I was thinking of drawing an Asian girl staring at herself in a mirror, however one side depicts her covered up with a hat, face mask, glasses, etc and then the other side would be her showing herself. I’m also considering not just drawing her normally, but maybe showing some anxiety. I know that I also wanted to draw a drawing depicting unraveling anxiety by literally drawing someone, which ends up becoming “sketchier” and “sketchier” until it essentially becomes tangled doodles (if that makes sense). I might try to combine both of these concepts, but I also don’t want to overwhelm my pieces because I personally like it to be seemingly simple. I do know that I want to play with hair (ex: hair falling out), but we’ll see how that progresses. 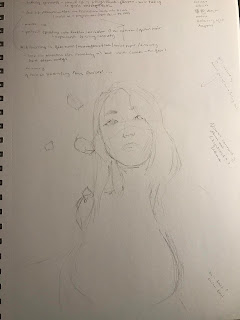 I also thought of doing a piece where someone is kind of drowning, but not in water. I’m thinking of replacing water with words. For the words, I want to use fake news and quotes concerning COVID-19 that I think are a bit sad to hear. I’ve provided some examples in my doodle. (rotate the image side-wise oops) 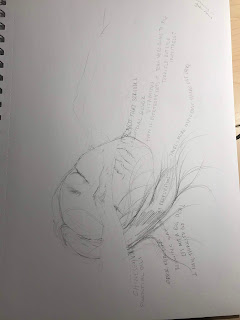 Also, as I was just staring out the window during quarantine, I just had the thought that the world really keeps spinning even though our lives are kind of at a standstill right now. Because of this, I wanted to do a piece trying to show this feeling. For this, I also really want to play around with colored pencils, so I’m thinking of drawing a scenery that I really enjoy and having something black and white/static in the foreground while the background/sky is colorful. I want to be able to show movement this way. I made a rough sketch of what I was thinking below. 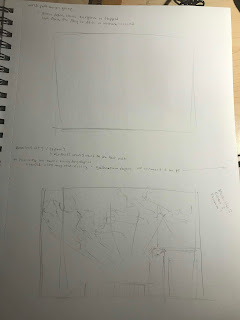 I was also thinking about how my life has really become digital. Even when contacting friends or family within the same house, we all use our phones or talk via zoom, so I was also thinking of having a piece where I drew something similar to a computer screen and drew people video chatting each other. However, I do want the people to maybe show different stages of “quarantine madness” or something else – I still haven’t really decided. 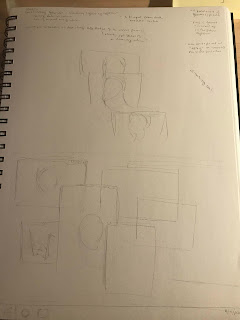